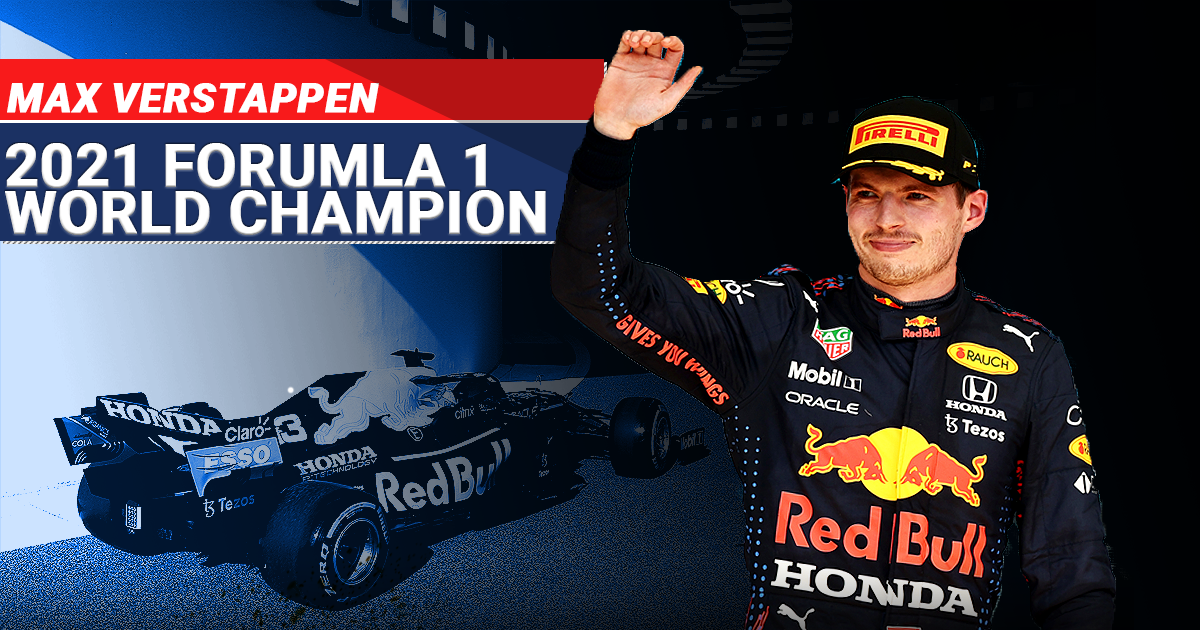 Max Verstappen wins the Formula One World Championship title in controversial fashion as he pinched the Abu Dhabi Grand Prix and the world title from Lewis Hamilton on the final lap.

Hamilton had held the lead for the majority of the race and looked to be coasting to victory when the safety car was brought out after a crash from Nicholas Latifi in the final few laps.

It looked like the race might end behind the safety car, but controversially, just one racing lap was left and the Dutchman was just behind the Brit, having been over 12 seconds behind before the crash.

Verstappen made it past, thanks to fresher tyres, and held off a Hamilton response to cross the line and claim the world title, to Red Bull’s delight and the fury of Mercedes.

Hamilton was poised to eclipse Michael Schumacher’s record with an eighth world title before it was cruelly taken away from him, leaving the British icon devastated but sporting in defeat.

‘Firstly a big congratulations to Max and to his team,’ Hamilton said. ‘I think we did an amazing job this year. We gave it everything, we never gave up and that’s the most important thing.’

Former world champion Alain Prost told BBC Radio Five Live: ‘It’s going to be commented in terms of rule about safety car. Very difficult for me to have clear judgement, I can understand they are not going to be happy about that.

‘It was exceptional for the show. Always going to be controversial.’

Hamilton started the race second on the grid with Verstappen on pole but the Dutchman’s lead lasted just a matter of seconds with the Brit surging past him immediately.

There was almost instant controversy, though, as Verstappen tried to reclaim the lead and Hamilton was forced off the track after contact between the Mercedes and Red Bull cars.

The two were side by side as Verstappen made a move and Hamilton drove outside the white lines, but surged off into the lead.

There was some confusion as Red Bull thought Hamilton had gained an advantage by going off the track and wanted him to give it back. However, the stewards ruled that he had indeed given back any advantage he had gained. Something that Verstappen and Red Bull chiefs strongly disagreed with.

Mercedes saw it as Hamilton being forced off the track by Verstappen’s bid for the lead and simply did what they had to do.

Hamilton was out in front from there, though, as Red Bull seethed and tried to just concentrate on catching the defending champion.

It was something that was proving difficult, but Verstappen was given a significant helping hand by his Red Bull teammate Sergio Perez on lap 20.

The Mexican had taken the lead after a Hamilton pit-stop and he produced some fantastic teamwork to slow down the Brit, defending against him and managing to retake the lead after losing it thanks to DRS.

Predictably he could not hold Hamilton off for long, but Perez’s work saw Verstappen gain ground and when the Mexican moved aside for the Dutchman he was just over two seconds behind the leader.

It seemed to have spiced things up but Hamilton was just too fast and he gradually extended his lead away from his rival, who could do nothing to stop the champion’s dominance.

Things did then get spicy again, seemingly out of nowhere, when Antonio Giovinazzi retired in his Alfa Romeo, bringing in a virtual safety car on lap 38.

Verstappen headed into the pits and got a new set of hard tyres, while Hamilton stayed out on his tyres that had already done over 20 laps. As the Dutchman returned to the track he was just over 17 seconds behind but was now moving faster than the leader and the gap was narrowing.

Hamilton was concerned, with Mercedes not wanting to pit and give up track position, but his tyres were not the ones he wanted to finish out the race.

It did make things interesting again, but Hamilton stayed calm and was racing well enough for Verstappen not to be able to close the gap nearly enough.

There was a serious sting in the tail for Mercedes, though, when Nicholas Latifi crashed out four laps from the end and brought the safety car out onto the track.

Verstappen pitted again while Hamilton stayed out on his old tyres and confusion reigned for some minutes as we waited to discover if we would get any more racing laps or the race would finish behind the safety.

It turned out to be just one lap to go with the two leaders heading off and Verstappen only just behind Hamilton but with much fresher tyres and pinched the World Championship.