Red Bull's head of motorsport Helmut Marko suggested his Formula One and junior drivers should catch the coronavirus while racing is on hold so they would be protected from sickness later in the year.

The 76-year-old Austrian, a former grand prix racer who is now the energy drink company's head of driver development, made the startling revelation in an interview on Sunday with broadcaster ORF. 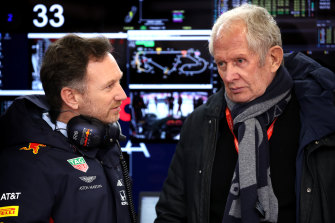 Red Bull’s Helmut Marko said the idea had not been well-received.Credit:Getty Images

Marko added that the idea had "not been well received" by Red Bull management.

"We have four Formula One drivers and eight or 10 juniors," he said.

"The idea was that we would organise a camp to mentally and physically bridge the dead time and that would be the ideal time for the infection to come.

"They are all strong young men in good health. That way they would be prepared whenever the action starts."

Nearly 738,500 people have been infected across the world and about 35,000 have died so far, according to a Reuters tally.

Red Bull own two Formula One teams with Dutch 22-year-old Max Verstappen and Thai racer Alexander Albon in the main one and Frenchman Pierre Gasly along with Russian Daniil Kvyat at Italy-based AlphaTauri.

The Formula One season is currently stalled after the cancellation of the Australian season-opener in Melbourne earlier this month due to the spreading pandemic.

Six races have also been postponed and the showcase Monaco Grand Prix in May cancelled.

Formula One has said it hopes to get the season started some time in the European summer with a reduced calendar of 15-18 races.

That may still be optimistic, even if the sport races into the new year as has been suggested.

Marko, whose Formula One career ended when he was blinded in his left eye by a loose stone thrown up during the 1972 French Grand Prix, said European countries had to emerge from lockdown before any racing could happen.

Austria is due to host a grand prix at the Red Bull Ring on July 5 but that too remains uncertain.

Formula One teams, commercial rights holders Liberty Media and the governing FIA have agreed to save money by using the same cars next year, postponing a raft of major technical changes that had been due in 2021.

"Liberty expects a loss of $200-300 million in revenue, and this is also transferred to the teams in a quota. That is why we decided to take these austerity measures to make up for this loss of revenue," said Marko.