The postponement of the Australian Grand Prix from March 21 until late in the year could have a small silver lining for Australian race ace Daniel Ricciardo.

The Perth-born Formula One star cannot make his debut for his new team McLaren in front of his own fans, but the new F1 schedule should give him more time to come to grips with his new car, race engineers and pit crew before the season starts.

The decision to revamp the calendar to move the Melbourne event – traditionally the season opener – to November 21 means that Bahrain on March 28 will bring the curtain up on the 2021 campaign. 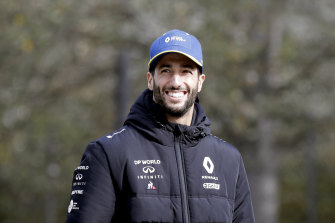 Australian F1 driver Daniel Ricciardo is set to embark on a new chapter with McLaren this year. Credit:AP

Ricciardo, who is an ebullient character, will likely take the disruption in his stride and be determined to fight it out with McLaren teammate Lando Norris from the start. But he will have to make a rapid adjustment to his new environment.

Testing, which is where drivers get to grips with their new equipment, will take place over three days before the season starts and as the sport looks to adjust to the continuing challenge of COVID-19.

And expectations from his new paymasters are high, as McLaren racing director Andrea Stella revealed to leading UK motor publication Autosport, saying Ricciardo was being pushed hard both at the company's factory in Woking, just outside London, and when he is away from base.

"You need to do to make sure that you are as prepared as possible and it's a combination of competence and being methodical," Stella said. "The objective is to be at the first race, in qualifying, and it be like Daniel has driven the McLaren and has worked with these engineers, and the team, for a long time."

In the same publication, Ricciardo reflected on his time with Renault, whom he joined in 2019, saying he thought that despite two winless years the team had made progress while he was there.

"I guess there's levels of success. Real success would be winning a title in the two years, but definitely stepping on the podium a couple of times made it feel like a success," Ricciardo said.