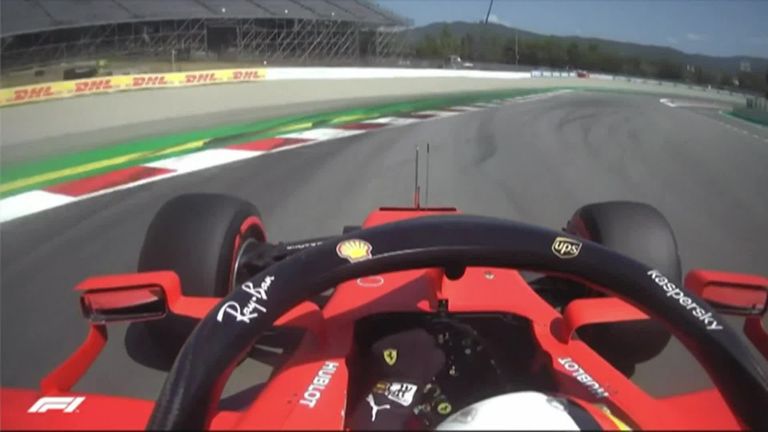 Sebastian Vettel’s “miserable” F1 2020 continued in qualifying for the Spanish GP as he once again failed to reach Q3, with Sky F1’s Martin Brundle and Nico Rosberg both giving their verdict on his struggles.

Vettel, the four-time world champion who is 13th in the current standings, is armed with a new Ferrari chassis this weekend but was once again beaten by Charles Leclerc in qualifying – albeit only by 0.2s – and finished down in 11th.

Leclerc was ninth – highlighting Ferrari’s slump – but it is Vettel who will be feeling the strain.

He had never exited Q2 on pace alone during his Ferrari career before this season, but Spanish GP qualy was the third time he has not made the top 10 in 2020.

“What a miserable season Sebastian Vettel is having,” said Brundle during commentary. “He just seems to have lost his mojo.”

Rosberg, the 2016 F1 champion added of his countryman: “It must be so tough for him mentally now as well.

“To miss out on Q3 by two thousandths of a second from Lando Norris, that’s like 10cm at the end of the lap. For him, that must be very, very frustrating.

“I think he’s in one of the most difficult mental challenges of his career at the moment.”

Vettel himself admitted to Sky F1 he was finding his 2020 car’s performance difficult to explain.

“It’s up and down,” he stated. “There are still some things that I can’t really put an answer to. But I’m trying to do all that I can and ignore the things that might not be right and do the best that I can.”

What will be more frustrating to Vettel is he was actually up on Leclerc by two-tenths of a second in the first sector on the pivotal Q2 laps, but then fell back through the twisty final sectors.

He added: “The first sector was OK but then in the middle sector the car started to be more and more nervous.

“I struggled in particular in Turn Seven, losing the rear halfway so it was difficult to judge how much speed to carry in. Also Turn Five was very tricky for me this afternoon.