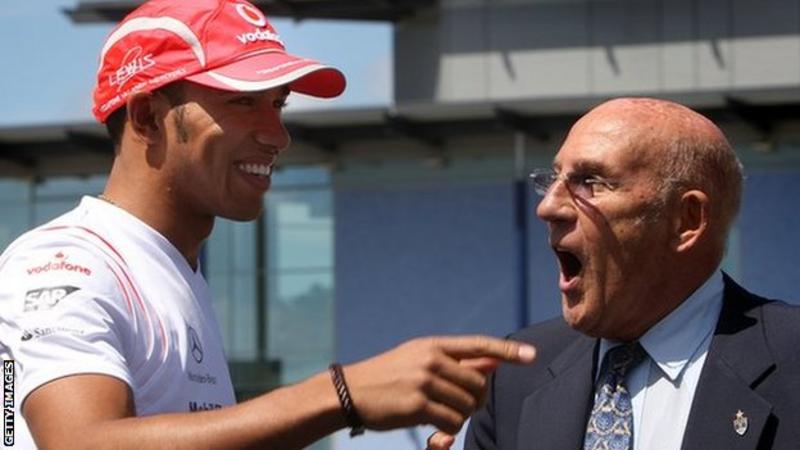 Sir Stirling Moss has been praised as a “true icon and legend” who lived an “incredible life”.

The world of motor racing has paid tribute following his death aged 90.

Moss is widely regarded as one of the greatest Formula 1 drivers of all time, even though he did not win the World Championship.

“I think it’s important that we celebrate his incredible life and the great man he was,” six-time champion Lewis Hamilton wrote on Instagram.

His former team Mercedes said they have “lost a dear friend”, while rivals McLaren described him as “a prodigious competitor and consummate gentleman”.

Mercedes driver Hamilton described his friendship with Moss as “an unusual pairing.”

Hamilton said: “Two people from massively different times and backgrounds but we clicked and ultimately found that the love for racing we both shared made us comrades.

“I am truly grateful to have had these special moments with him.”

He claimed 212 victories in all categories before retiring from top-level motorsport in 1962.

Moss retired from public life in January 2018 because of ongoing health problems, and is survived by his wife and two children.

There have been a number of tributes from the world of motorsport for Moss.

“Most of all, Stirling’s career was characterised by an impeccable sportsmanship and in this he truly set himself apart.

“It is no exaggeration to say that we will never see his like again.”

Former F1 world champion Damon Hill said “no-one ever regarded Moss as anything less than one of the greats.

“He launched all the other careers of British racing drivers who went on to become world champions of which he was sadly denied,” Hill told BBC Sport.

Mario Andretti, who won the World Championship in 1978, described Moss as his hero.

“Such a kind man beloved by everyone. He was a true giant in our sport and will be missed forever,” Andretti wrote.

British racing driver Paul di Resta said Moss was “one of the kindest men I had even met,” while compatriot Max Chilton felt Moss’ “charm held a room’s attention”.

“He had a press on style on the track and in life. Remarkable man,” was the view of another British ex-F1 driver, Martin Brundle.

“He had such great stories to tell, and it was a privilege to know him.”

Former F1 team boss Eddie Jordan told Sky Sports that Moss was “one of the greatest drivers ever. He was the one person that transcended the sport.”

Away from motorsport, former world heavyweight boxing champion Frank Bruno said Moss had “privately supported me over many years and will be greatly missed”.

Ex-England football captain and BBC Match of the Day presenter Gary Lineker added: “Sir Stirling Moss has reached life’s chequered flag, and what a race he drove. Wonderful driver and a lovely man.”