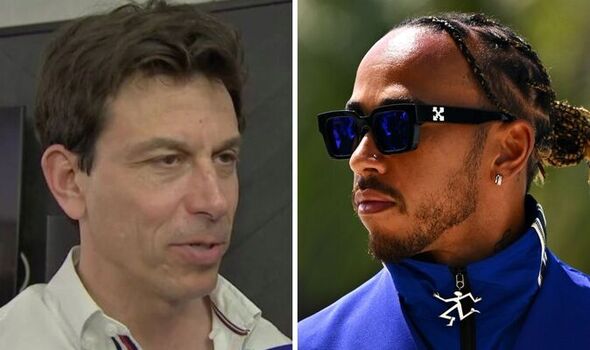 Toto Wolff has claimed only Lewis Hamilton will know when the time is truly right to retire given what he has achieved within Formula One. It’s been a challenging campaign so far for the seven-time world champion, who currently finds himself seventh in the drivers’ standings.

Hamilton is way off the pace with just 28 points and one podium finish due to Mercedes’ struggles trying to improve their car – despite making more changes to its engine design at the start of the season than any other time since the inception of F1’s hybrid rules back in 2014.

Last time out at Imola, Hamilton conceded that there was ‘nothing he can do’ to get his season back on track after one of the worst displays of his F1 career.

The Brit was lapped by arch-rival Max Verstappen which has led to suggestions that Hamilton may now call time on his career at the end of the campaign – if results fail to improve.

Wolff, however, insists the ball rests firmly in Hamilton’s court while also offering assurances Mercedes will be working around the clock to ensure he becomes world champion again.

The Austrian told Sky Sports: “Lewis has been the most successful driver in Formula One history in terms of wins, positions, podiums you name it. He is equal with Michael Schumacher on seven championships.

“I think he will know pretty well when it’s time to retire. Nobody can take away the legend status anymore.

“We are here to provide him with a machine that will make him capable of winning his eighth title, whether it’s this year or the next.”

Hamilton penned a new two-year deal with the Silver Arrows last July and as things stand, he intends to see out the full length of his contract.

The 37-year-old recently shared a defiant message in response to the challenges he is facing with Mercedes.

He posted on Instagram: “Working on my masterpiece, I’ll be the one to decide when it’s finished.”

Speaking after Imola, Hamilton did in fact concede that his hopes of retaining the championship were over after just four rounds of action.

“I’m out of it, for sure,” Hamilton said on his dwindling title hopes. “There’s no question about that, but I’ll still keep working as hard as I can to try and somehow pull it back together somehow.

“There is nowhere else I want to be. Just because we have hit a rough patch, it is not in my DNA to back out.

“We can fix this. It is going to be a painful year that we are going to have to ride out together.”

Hamilton will be looking to start the fightback this weekend at the first-ever Miami Grand Prix.

The race will see the track at the Miami International Autodrome make its F1 debut, having signed a 10-year contract ahead of the 2022 season.