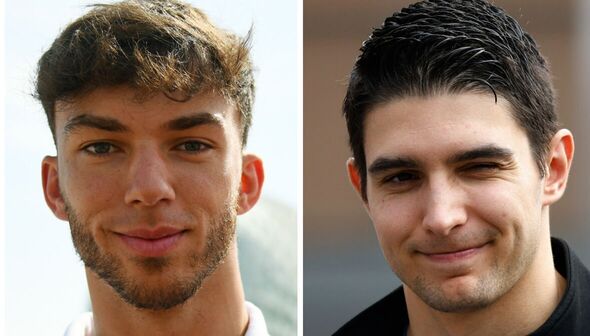 Alpine chief Laurent Rossi has said ‘many’ think his drivers Pierre Gasly and Esteban Ocon are ‘big kids’ as the pair prepare to become team-mates for the first time next year. The 26-year-olds will bring an all-French line-up at Alpine next season and the pair are familiar rivals having grown up on the same junior kart racing series.

Ocon has been with Renault and then the re-branded Alpine since 2020 and clashed with his team-mate Fernando Alonso last year. Ocon and Alonso collided during the opening lap of the Brazilian Grand Prix damaging both cars and resulting in both drivers missing points.

The pair were told they ‘let the team down’ after their crash hindered Alpine’s efforts to finish fourth in the constructor’s championship. The team-mates also clashed earlier in the season at the Hungarian Grand Prix after Ocon closed the door on Alonso and was accused of forcefully defending his position.

Alonso has now retired, and after being released from his contract with Red Bull, former AlphaTauri driver Gasly was appointed as the second driver at Alpine next year. However, the French drivers are former karting rivals and boss Rossi is aware of a potential conflict between them next year.

Ocon will remain with Alpin until the end of the 2024 while Gasly is on a ‘multi-year’ contract and Rossi has warned both that their futures in F1 could depend on their relationship working. He told Formula 1 News: “If any problems come up, they will be the losers because everyone expects that and many think they are big kids.

“At the end of the contract. They will approach 30 years [of age]. They must not mess up because it is dangerous to find yourself pushed out of a team because you haven’t shown sufficient maturity.

“Both are aware of this and they have affirmed it to me individually and together.” Ocon had a good start with Alpine, winning the Hungarian Grand Prix last year and finished 11th in the driver’s championship in 2021. Last year the French driver was more consistent and despite not finishing on the podium, he accumulated more driver’s championship points and finished eighth overall.

Meanwhile, Gasly struggled at AlphaTauri last season finishing in the top 10 on just six occasions. The French driver had shown earlier promise with the team winning the Italian Grand Prix in 2020 and finishing third at Azerbaijan last year but failed to replicate that this year.