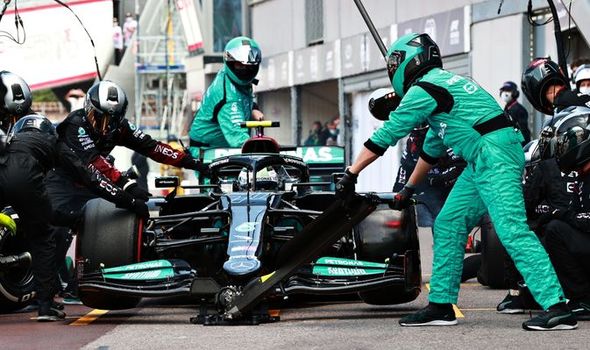 Bottas, who was pushing Max Verstappen at the front of the field during the race, looked in good shape for a strong race finish in the principality, but a solid start turned into an abrupt ending when the Finn pulled into pit lane for a routine pit stop on lap 33.

Bottas’ teammate Lewis Hamilton had already pitted for hard-compound tyres the previous lap when Bottas trundled down pit lane for his first planned stop of the day.

But disaster struck Bottas’ hopes when his right front tyre could not be removed by the pit crew who, despite repeated attempts to unscrew the wheel nut with the wheel gun, could not remove the worn right-front tyre.

It ended Bottas’ chances of success in the race as his Mercedes was subsequently retired from the Grand Prix.

Sky Sports F1’s pit-lane reporter Ted Kravitz received confirmation from the Mercedes team that a faulty wheel nut had put paid to Bottas’ hopes, with the wheel gun unable to remove the offending nut to change the tyre.

“It was a cross-threaded wheel nut,” he explained.

“The wheel gun machined onto the axle.”

It was the latest dramatic occurrence in an action-packed Monaco Grand Prix, as pole-sitter Charles Leclerc was ruled out of the race before he even took his place on the grid.

The Ferrari ace and Monegasque racer had high hopes for his first race finish on the iconic street circuit at his home Grand Prix, but those hopes were dashed on his out lap as, on his way to the grid, he experienced an issue with his left drive shaft and was retired from the race before the warm-up lap.

“I wouldn’t think too much because for now I’m not aware of everything, but what I know is it was something not coming from the gearbox, but it’s more coming from the rear left of the car,” he told Sky Sports F1 after his retirement.

“Whether that correlates with the crash we will see with the full investigation after the race, it’s still early days.

“In the garage it was very, very difficult to feel OK. But yeah I guess now I’m getting used to this feeling.

“I’ve never finished a race here. It’s a difficult one to take.

“I also feel for the team to be honest.

“The mechanics did such a hard job yesterday to check everything, then this happens. It’s a shame for everyone.”