From a 20-a-side match in a cricket field (with 20-minute scrums) to Saturday’s Six Nations clash behind closed doors at Twickenham… Mike Brown, Matt Dawson and Scott Hastings are among those to relive 150 years of England vs Scotland!

Rugby’s longest-running rivalry celebrates its 150th anniversary when England play Scotland at Twickenham for the Calcutta Cup on Saturday.

From a 20-a-side game on an Edinburgh cricket field to a match played behind closed doors in a global pandemic, the fixture has a long and storied history.

Here, Sportsmail delves into the great rivalry before the 139th Test between the sides is staged. 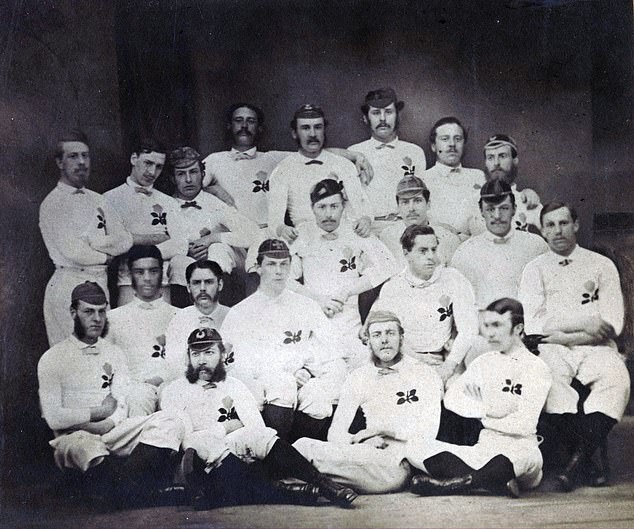 England and Scotland played a football match in March 1870 — billed as the first international — but it is not recognised.

The Scots objected to it as their players were all from London, not Scotland, and they weren’t playing the right sort of football.

So they challenged England to play a ‘proper’ game in 1871 — using Rugby School rules.

The Times sent a note out to gather English footballers and four days later in The Scotsman the Scots captains issued their challenge.

The rules were agreed by the captains just before kick-off. It was 20-a-side and players were from the professional classes — with 11 Englishmen from Rugby School. 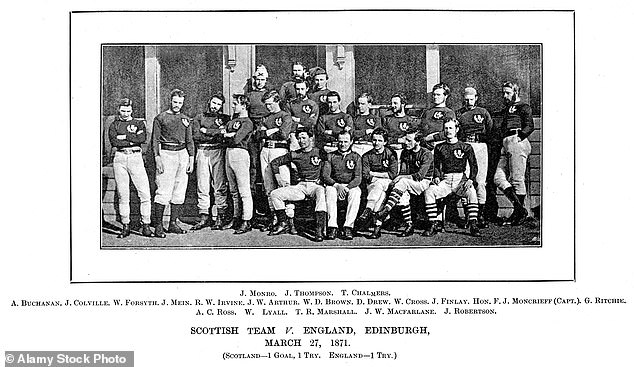 It made a ripple, with 2,000 people watching at Raeburn Place in Edinburgh.

Scrums could last 20 minutes. It was attritional, forward-driven and Scotland won by kicking one goal to nil. A try back then simply gave you the chance to kick a goal and Scotland converted theirs.

In 1879 the Calcutta Cup — the oldest international trophy in the world, formed from 270 melted Indian rupees — was first used and it was presented to the winners until 1988, when Dean Richards and John Jeffrey took it on a night out after the game and it came back somewhat dented!

Thankfully it has been restored. The teams lift a replica now.

The game has always been influential. In 1884, a disputed try in an England win caused the formation of the International Rugby Board.

Scotland were at first resistant to having numbered jerseys. When King George V questioned this in 1928, SRU chairman James Aikman Smith replied: ‘This, sir, is a rugby match, not a cattle sale.’

In 1914 England won their second Grand Slam in a classic game at Inverleith, in which Cyril Lowe scored twice. Poignantly, of the 30 who played that day, 11 would be killed in the First World War.

The 1938 edition was the first rugby match broadcast on the BBC. Robert Wilson Shaw scored in a Scotland victory which sealed the Triple Crown. A 10-8 victory in 1963 saw England win the Five Nations, Richard Sharp scoring a famous try featuring two glorious dummies. It was the last English championship until 1980.

Sometimes politics has spilled into the game, but while Scotland have won the Cup only five times since 1987, it has always been a great sporting rivalry. 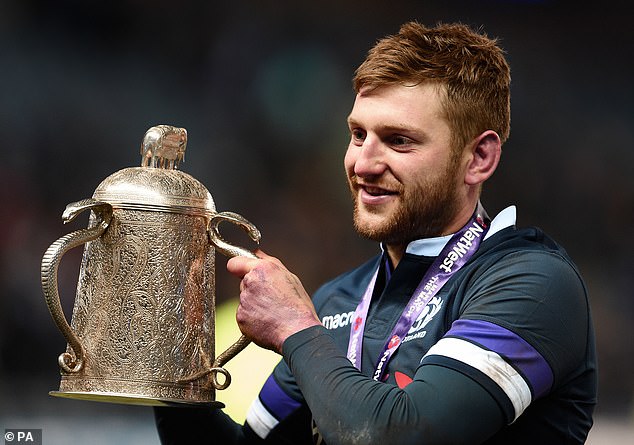 I was part of the last Scotland side to win at Twickenham, in 1983 — the forwards got stuck in and half backs Roy Laidlaw and John Rutherford were on song.

I tried a drop-goal and it just about hit the corner flag. Keith Robertson hit one later and said: ‘That’s how it’s done, Jim’ — the bugger.

At half-time, loads of female streakers came on the field. Not one of us was listening to the team-talk from Jim Aitken!

We stayed in Charing Cross that night and grabbed this boy who played the piano at Murrayfield dinners, brought him to the hotel and stayed up until 7 o’clock in the morning drinking and singing songs with him like My Way. 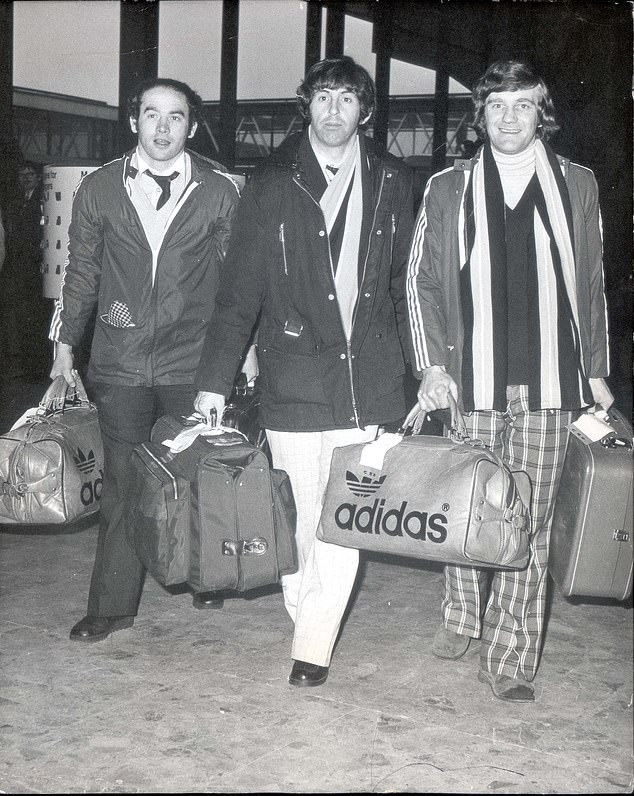 My first England game was the 23-9 victory in 1972 at Murrayfield. I was only 20 and the rucks and mauls were brutal with stamping and all sorts — it was pretty harum-scarum.

Personally, I would rather beat Wales in the 1970s as they were the best and I got on well with Englishmen like Mike Slemen and John Carleton. But for the fans, England were the Auld Enemy and form went out the window.

I never went with the idea that England were here to steal your land or cut your throats — but some of our forwards did!

England will always have the advantage of having so many players to pick from.

My wins were few and far between against England. My first in 1986 was a record victory, 33-6, and I scored my first Scotland try.

England picked a lumbering pack. We had four forwards who were No 8s, played an attacking style and it fell into our arms.

When we beat England for the Grand Slam in 1990 it was a feisty old game. After the 1989 Lions tour we thought we worked harder, were fitter and better than the English. We had to stop training early in the week to temper the emotion.

There was a great dance and dinner after. At one point my brother Gavin tapped me on the shoulder and said, ‘I owe you that pint for that tackle you made on Rory Underwood’ — so we drank a beer at 11 o’clock the next morning having gone right through! 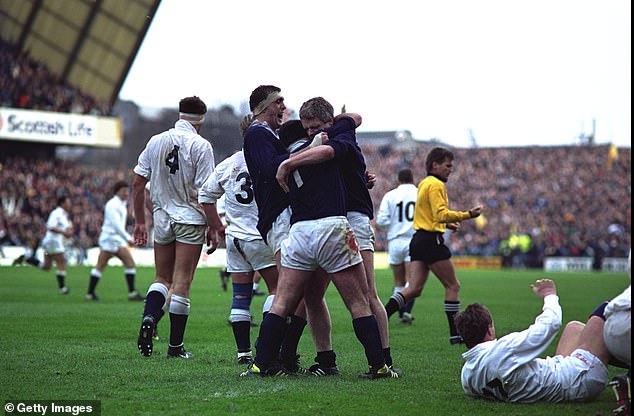 Antagonism exists more off the pitch than on it. After the 1990 game, Brian Moore came up to a huge party at my club Watsonians where Scots were getting plastered.

He stood up in front of 200 people and declared, ‘You thoroughly deserved the victory. This hurts, but we’ll win the Grand Slam next time.’

The history is phenomenal — I live 10 minutes from Raeburn Place — and I hope that isn’t lost.

Three years ago, Ben Te’o came out with disrespectful comments about history being irrelevant and that it wouldn’t match rugby league Grand Finals he played in.

What an ass — once a New Zealander, I guess.

Scotland was always a bizarre fixture. We had some convincing victories at home but Murrayfield had a hoodoo over us.

The Scots were so incredibly resilient there and found an inner strength. It was a full-on battle at times.

The Murrayfield changing rooms were small, cramped and had an enormous pillar in the middle so you couldn’t see your team-mates. The showers were cold and the hotel was in the middle of town — it was very oppressive.

I was captain for the 2000 defeat and one of the Scottish red-top papers sent a photographer to our training at the university in Edinburgh pretending to be a student.

He was saying, ‘You’re my favourite player’, and had these two girls with him who stood either side of Joe Worsley for a picture — as it was taken, they whipped their tops up to show their breasts! 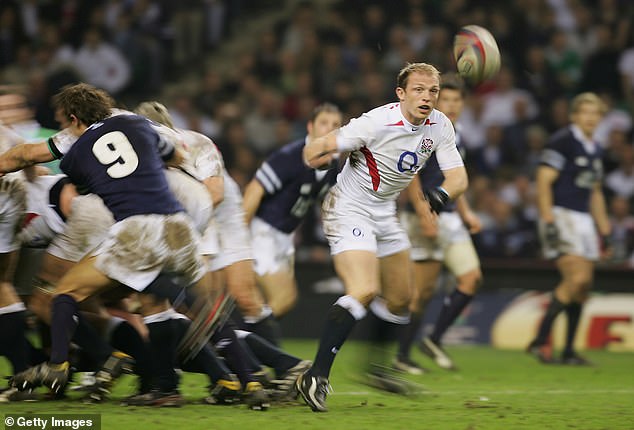 We chased the photographer round the campus and demanded that he delete the pictures, but he wouldn’t. This was the day before the game. Chaos.

Scotland adapted to the awful weather brilliantly and we didn’t. That was a significant low-point in my career.

In 2001 we won 43-3 — a record victory. I remember walking out of the tunnel, behind which is the main TV camera giving an over-head shot of the players running out — Andy Nicol and I caught each other looking up at the jumbo screen and noticing we had bald spots on top.

You can’t help but cover it with your hand — it’s funny how vain you can be in those moments.

Twickenham is always a tough place for Scotland, although they have nothing to lose, so it becomes more open than at Murrayfield where the weather often dominates matters.

Four years ago they came down feeling confident and England put 60 points on them.

One of my earliest memories of watching the Five Nations on TV with my dad is Tony Stanger collecting a chip over Rory Underwood to score in 1990.

I loved watching guys like Gavin Hastings, Scott Hastings and Gregor Townsend. You always knew it was going to be a tight game.

By the time I first played against Scotland, in 2012, they weren’t as good. The Five Nations had become the Six Nations and Scotland were a similar standard to Italy. I played against them seven times and won the first six.

Playing Scotland at Twickenham was never much of an issue, but travelling to Murrayfield was more of a challenge. 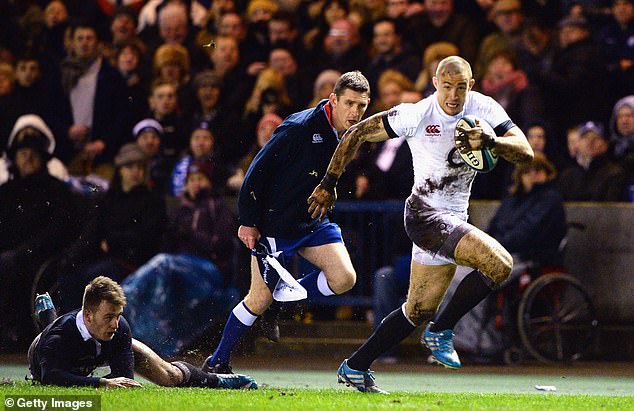 My standout game was in 2014. Their pitch was a disgrace. It was like the local park. There had been a maggot infestation and the ground staff had been using garlic to try to curb the problem. It was like a bog, but we won 20-0.

I was named man of the match — a really proud moment.

For me, guys like Stuart Hogg and Greig Laidlaw were synonymous with playing Scotland. They were real competitors, but during my time they didn’t quite have the quality around them.

It wasn’t until my last Test at Murrayfield, in 2018, that we lost. They tried to wind up George Ford and Owen Farrell in the tunnel before kick-off and it worked.

Since then, guys like Finn Russell and Hamish Watson have stepped up and it’s been a closer rivalry. But England’s forwards will be too strong on Saturday and I’m going for a 20-14 home win. 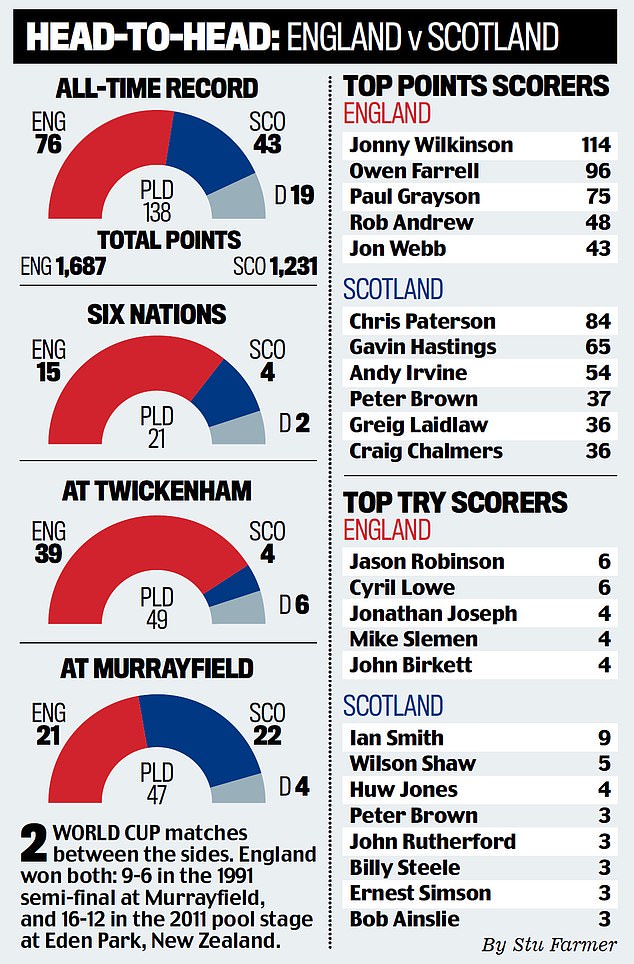