Home » Rugby » 4 Points: Tigers emphatically move on from ‘an era of failure’

''I've had a gutful of representing an era of failure,'' Brendon Gale told a gathering of 150 of Richmond’s inner sanctum in March 2010. 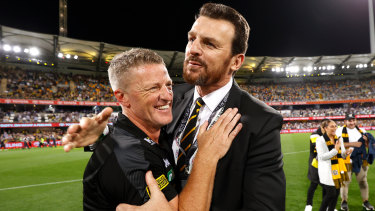 Then club president Gary March echoed the view in a video presentation.

“It's been a barren trot for us for a period of time now and we have really had to look at why that has come about and where we sit in the AFL landscape,'' March said.

''It's by no means a conservative plan, it's a very ambitious plan about how we can get Richmond back to being not only a top-four club but hopefully the pre-eminent club in the AFL.''

Richmond had already ended the era of failure before Saturday night in Queensland.

They ended the era of failure when they not only removed the financial debt but also built wealth for the club. They ended that era when they added members like tattoos – they’re everywhere.

They ended that era when they stopped finishing ninth and started making finals.

They ended that era and ceased to be the butt of a joke when they resisted the push by the Focus on Football group that looks more ridiculous with every passing flag, but which in a not-so-distant era would have gained traction as a smart idea. (Claiming credit in The Age for inspiring the three flags is just breathtaking).

The Tigers emphatically ended that era with the first flag. That flag restored their credibility. 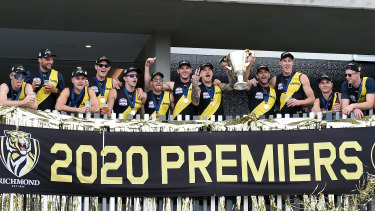 The second flag two years later moved them from a heart-rending riches-to-rags-to-riches story to a sustainable and, dare it be said, mature club. Good clubs win one flag, very good clubs win two in short order.

A third flag has recrafted them again. Only the best clubs win flags in clusters. They certainly present a persuasive argument that they are now the pre-eminent team.

The rarity of Richmond’s achievement is that they had a plan that worked. Football is littered with five-year plans, Powerpoint presentations and lofty, unrealistic goals. Even the Focus on Footy troupe had a brochure. Ok it might have been on craft paper with crayon, but it was still a brochure.

The surprise is Richmond’s plan worked. They built their list. They held it together.

The most pivotal moment in the history of the club was not the night Gary March and Brendon Gale spoke to those inner sanctum members, it was the moment when they a price on what they would spend on Dustin Martin’s new contract and did not budge. 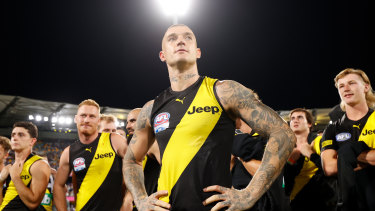 Dustin Martin and his Tiger teammates at The Gabba on Saturday night.Credit:Getty Images

It was the night when Martin sat with GWS officials and they looked at him and asked ‘why are you leaving?’ And Martin thought “Yeah, why am I leaving?” That chat crystalised in his mind where he’d really rather be.

That brave moment when the club refused to overspend and still kept the player who has now become probably the best Richmond player ever, is one of the most important moments in their history.

Three Norm Smith Medals now and counting. Does Richmond win all three flags if Martin chose at that point to leave? Do they even make all three grand finals if Martin, who also won that Brownlow, is not there? Probably not, but maybe. Richmond has argued as a club that no one person deserves all the credit, but surely, if there’s one who does deserve it, Martin has to be pretty close.

There is a lesson in that moment for other clubs and players alike. Richmond didn’t overspend (they still spent a lot) and kept their player. That does not always happen – you can dig your heels in and the player still goes – but the teams that have golden eras always have a habit of not overspending on their players and yet they manage to cultivate something about themselves – a culture even if just for a time – that has players staying for less and achieving more.

Dustin Martin could have left for more but stayed for less and in the end has earned so much more.

Leigh Matthews made a boo boo. This is notable because … it’s Leigh Matthews, and it gives heart to all of us who from time to time just get muddled like Leigh did.

Leigh had been thinking Short when he wrote Broad. Nathan Broad was ok, in fact it was the first time a Broad has been popular playing at the Gabba, but Jayden Short was better. Leigh said so on 3AW. And corrected his error on Sunday.

The consolation thought for Geelong watching the second half was that Jeremy Cameron will be there next year (move/trade deal pending).

He’ll make them better. Whether he would have been the difference on Saturday is for now moot.

He will mean that they will have a second genuine mobile target up forward so Paddy Dangerfield could have been played on-ball all game.

Night grand finals have had their cameo now we can return to day grand finals when normal transmission resumes.