Geelong star midfielder Cameron Guthrie says he “really feels” for players who won’t be chosen for the grand final against Sydney on Saturday, given the club’s depth. 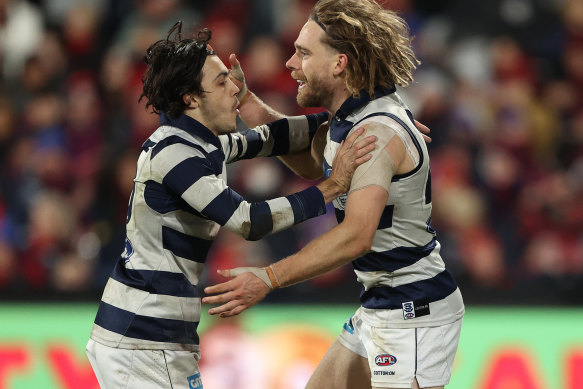 Cam Guthrie (right) is back in 2020 form.Credit:Getty Images

“We’ve got some really unlucky players who haven’t played the first couple of finals,” Guthrie told The Age.

“Some of the players who have missed out I love playing footy with and I think they’re stars and I really feel for them and their situation.”

The Cats spread of talent across the park means the side haven’t needed to rely on superstars, such as Tom Hawkins, Patrick Dangerfield and Joel Selwood, alone this season. However, Guthrie says it means there will be some unavoidable disappointment.

“There’s going to be disappointment no matter what, which I 100 per cent understand and respect because they’ve been such an important part of our group all year and the previous year,” said Guthrie.

“So we’ve just been reminding ourselves it’s been a full club effort, not just the 22 or 23 that run out on the ground on Saturday, but definitely a whole organisation building to hopefully what we can deliver on Saturday.”

Players who have been on the periphery this year have included Brandan Parfitt, Sam Menegola and Luke Dahlhaus, one of whom could come in to replace Max Holmes if he doesn’t pass his fitness test after injury concerns ahead of the match.

Veteran Shaun Higgins, who this week announced his retirement, has also been out of main selections this year, given the stardom of the Geelong forward line.

Guthrie says the depth of the group has added to the consistency of the side, which he says has built confidence and trust while out on the park.

“I mean, as a midfield group, we know what to expect from each other and I find I feel so much confidence looking at our defensive group and the way they play and the players we’ve got in the forward line to be able to kick a winning score,” said Guthrie.

“So, I don’t think we’ve got too many weaknesses heading into the game. I think we’re ready to go.”

The Cats are going into Saturday’s season-decider on the back of 15 consecutive wins, including putting Brisbane to bed in last weekend’s preliminary final by 71 points.

This is while Sydney are coming into the match after nine wins in a row and earned their grand final spot by an inch, holding off Collingwood by just one point in last Saturday’s SCG preliminary final.

Geelong and Sydney haven’t met since round two when Lance Franklin kicked his 1000th goal and Guthrie says both sides being in better shape since that match.

“They’ve been a good team all year, and we played them early in the year so I think we’re a better team than we were then [and] I think [they’re] definitely a better team as well,” said Guthrie.

“We’ll probably have a little bit of a look at that game but I mean, both teams have evolved. So, I think we’ll be looking probably more the last couple of weeks of what they’ve put out in the park.

“They were pretty good on the weekend, particularly early, but I think we’ve got every reason to go in and I believe that we can have a good crack at it.”