The Sydney Roosters and Melbourne Storm have angrily leapt to the defence of Cooper Cronk after his integrity was questioned in a newspaper report due to his dual roles at the powerhouse clubs.

A day after the Storm posted an Instagram photo of Cronk helping out with the club’s halves at training last week, a back-page headline in a Sydney newspaper featuring the words “double agent” appeared. 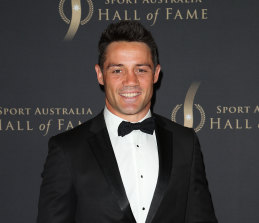 No double agent … the Roosters and Melbourne are upset Cooper Cronk’s integrity has been questioned.Credit:Getty

Some officials at the Roosters were supposedly surprised by Cronk’s involvement with the Storm given he was on the Bondi payroll.

Despite both clubs having made it clear privately they had no issues with Cronk’s doubling up, they were fed up after another report emerged on Monday asking how the legendary No. 7 could possibly remain involved in two different campaigns.

Immortal Andrew Johns was quoted in the article saying it was too difficult to hold roles at two different NRL clubs, something he juggled in previous years.

Roosters coach Trent Robinson, however, issued a press release on Monday, which read: “First and foremost, Cooper Cronk is a man of integrity. His ability to share his knowledge and insight whilst holding the strength of the two organisations is unquestionable.

“While this information has only now entered the public domain, it’s no secret to me that he mentors the Storm halves and works in their commercial department.

“Cooper has been clear and transparent with me about his role from the outset and as far as we are concerned, it’s business as usual.”

The Storm used Cronk for a field session to help mentor the halves at the start of last year, only for COVID to cut short any future involvement.

He continues to help the club he helped win four grand finals with commercial opportunities.

Melbourne plan on releasing their own statement in the next hour.

Cronk himself is said to be unimpressed with the recent reports.