Home » Rugby » A rollercoaster of a ride: The Bulldogs’ journey to the big dance

The Western Bulldogs have withstood a rollercoaster season of dizzying highs and torrid lows and their finals series reflected this en route to the grand final.

We recap every game of a tumultuous 2021 season.

Round 1 v Collingwood
Win 69-53
Former Magpie Adam Treloar kicked off his Bulldogs career with 18 touches against his former club as they scored a season-opening win over the Magpies. Bailey Smith, Jack Macrae, skipper Marcus Bontempelli and Lachie Hunter all shone as the Bulldogs opened the season with a win.

Round 2 v West Coast
Win 100-93
The Dogs and Eagles played out an early-season classic with Jamaine Jones putting West Coast ahead with three minutes to play but Aaron Naughton and Bontempelli kicked late goals to give their side an impressive win in a pulsating contest.

Round 3 v North Melbourne
Win 167-39
It will be a game forever remembered as the Josh Bruce match as the Bulldogs key forward kicked a career-high 10 goals, the first Bulldog to do so since Simon Beasley in 1987 and the club’s highest score and winning margin in their AFL/VFL history. Bruce made it clear post-game that his side was chasing the premiership. “The time is now,” Bruce said. 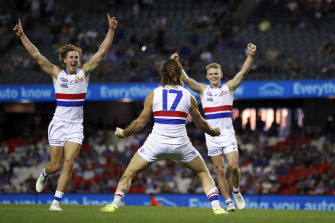 Josh Bruce celebrates after kicking his 10th goal in the match against North Melbourne.Credit:AFL Photos

Round 4 v Brisbane Lions
Win 73-54
Treloar had his best game in a Dogs jumper and his new club improved to 4-0 with a sturdy win over the Brisbane Lions in Ballarat. Treloar had 29 disposals, 18 of them contested and showed he was an ideal fit alongside the likes of Macrae and Josh Dunkley.

Round 5 v Gold Coast
Win 118-56
The Bulldogs kicked the first 11 goals of the match before settling in to enjoy Bontempelli’s 150th AFL game with a comfortable win. This was the first time since 1946 that the team had started the season 5-0. Naughton added another contender for mark of the year with his fly into the pack.

Round 6 v GWS
Win 104-65
Injuries put a dampener on an impressive Dogs win over the Giants in a freezing cold Canberra as Dunkley (shoulder), Tim English (jaw/concussion) and Lin Jong (hamstring) all went down yet the Dogs kicked nine goals in the last term to lock in the win.

Round 7 v Richmond
Loss 77-55
Richmond rebounded from a 25-point deficit in the second term to comeback and hand the Bulldogs their first loss of 2021 in a bumper Friday night clash at the MCG. Despite Dustin Martin being out with a concussion, the Tigers found their mojo in the second half to remind the Dogs they had much to do to contend for the premiership.

Round 8 v Carlton
Win 107-91
The Blues led by 27 points deep into the third term but Bontempelli inspired his side to get back into the match, as did Caleb Daniel and forwards Bruce and Naughton, as the Bulldogs kicked eight consecutive goals to storm to victory.

Round 9 v Port Adelaide
Win 96-77
The Bulldogs outmuscled the Power in Adelaide to score a statement win over a fellow premiership contender. The Bulldogs fired from the opening bounce after their previous round comeback win over the Blues, while the only downside was a left leg injury to defender Easton Wood.

Round 10 v St Kilda
Win 144-33
The Bulldogs were irresistible against the struggling Saints as Bontempelli kicked four goals, Macrae had 41 touches, Bailey Dale picked up kicks at will and Tom Liberatore dominated in the contests.

Round 11 v Melbourne
Loss 87-59
The Demons stamped themselves as the premiership favourites with a win over the Bulldogs at Marvel Stadium. The Demons took away the Bulldogs’ ability to break out of defence and they repeatedly turned the ball over, giving coach Luke Beveridge and his panel plenty to think about.

Round 12 v Fremantle
Win 96-55
A glittering display from Bontempelli in the first half set the stage for a comfortable win over the Dockers who were hit by injuries in the second half. The win kept the Dogs within reach of top spot while Naughton pulled in 13 marks. 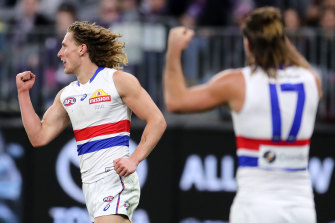 Round 14 v Geelong
Loss 83-78
Gary Rohan’s goal after the siren gave the Cats a thrilling win over the Bulldogs at GMHBA Stadium after a late goal from Toby McLean had the Dogs in front for the final few minutes. It was a reminder of the tiny margins that decide games between the elite sides in the AFL.

Round 15 v West Coast
Win 98-43
The Bulldogs dominated the Eagles in Perth in a stark change from their head-to-head battle in round two. Bontempelli was again dominant and moved up into the top of Brownlow Medal discussions while Macrae and Naughton were also outstanding.

Round 16 v North Melbourne
Win 108-79
The Bulldogs made light work of an improved Kangaroos side as Macrae and Bontempelli led them to a comfortable win. Cody Weightman also took a cracking mark to give the fans an extra highlight.

Round 17 v Sydney
Loss 79-60
The Swans were too organised and too composed in front of goal as Lance Franklin kicked the goal that sealed the win. Sydney clearly believed they too could be a top four side and they found the Bulldogs wanting in some key areas.

Round 18 v Gold Coast
Win 90-79
No.1 draft pick Jamarra Ugle-Hagan showed what he could do at AFL level in his second game for the Bulldogs, kicking three goals in a hard-fought win over the Suns. Bontempelli had 36 possessions while Dale had 30.

Round 19 v Melbourne
Win 85-65
The Bulldogs repelled a late charge from the Demons to score a statement win over one of the premiership yardsticks. Bontempelli lifted when it mattered kicking a goal and winning a centre clearance which he put on the chest of Ugle-Hagan who kicked truly to assure victory.

Round 20 v Adelaide
Win 105-56
The Bulldogs claimed a comfortable win over the lowly Crows in a windy Ballarat with Dale the creative fulcrum for the Bulldogs with assistance from Daniel and Smith.

Round 21 v Essendon
Loss 97-84
Peter Wright’s seven-goal haul saw the Bombers past the Bulldogs and deliver a surprising loss so close to the finals. The Bulldogs didn’t have many answers and lost Bruce to a season-ending knee injury in the final minutes.

Round 22 v Hawthorn
Loss 64-37
The Hawks took full advantage of a struggling Bulldogs side in Tasmania with the Dogs still trying to find a formula to replace the injured Bruce in the forward line.

Round 23 v Port Adelaide
Loss 66-64
The Power waited until the final minutes to take their first lead via a goal from Robbie Gray but it proved enough to score a tight win over the Bulldogs, who were sent into fifth place and an elimination final after the Brisbane Lions just pipped them on percentage to claim a top-four spot and the double chance.

Elimination final v Essendon
Win 85-36
The Bulldogs dared to dream and extended Essendon’s 18-year finals losing streak with a win in the elimination final in Tasmania. Weightman was the hero with four goals in wet and difficult conditions. 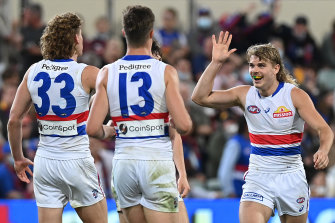 Bailey Smith was enormous in the final quarter of the semi-final against the Lions.Credit:Getty Images

Semi-final v Brisbane
Win 79-78
Smith’s goal and a desperate rushed behind from Laitham Vandermeer saw the Bulldogs claim an unforgettable, thrilling win over the Lions in a classic semi-final at the Gabba. But a late knee injury to Bontempelli put a scare through the camp.

Preliminary final v Port Adelaide
Win 116-45
The Bulldogs obliterated the Power, dominating the opening term and then the rest of the match to cruise into the AFL grand final after starting the finals in fifth position. The win came despite key defender Alex Keath and forward Weightman being out of the side, while Bontempelli, who had been under an injury cloud, impressed in his time on field before being rested late.