The AFL has heeded the calls of coaches by relaxing its controversial VFL anti-density rules little over a fortnight out from the start of the state league season.

Following a raft of criticism from senior coaches including Damien Hardwick, Alastair Clarkson, David Noble and Luke Beveridge, the AFL announced on Wednesday that teams would no longer need to reset to starting positions at kick-ins, would no longer need to have a player stationed inside the goal square at boundary throw-ins, and that the number of players required from each team to be inside defensive 50 at boundary throw-ins had been reduced from three to two. 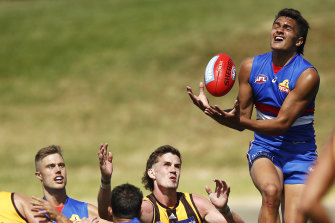 Under the newly revised rules, teams will have 12 seconds to get into place at a boundary throw-in. If they don’t comply, they will concede a free kick at the site of the stoppage.

The AFL released a statement explaining the decision.

“After continued analysis of more than 20 VFL practice matches held over recent weeks, the AFL has assessed the impact of the changes – as a whole – and has taken on board the feedback of key stakeholders, including players and umpires participating in the games,” the league said on Wednesday.

“To ensure ease of implementation and support the flow of the game, the following adjustment will be introduced ahead of this weekend’s practice matches and will be in place for the 2021 VFL competition.”

Richmond coach Hardwick had been among the most outspoken critics of the rule trial.

“We’ve got some players that we’re really excited by at that lower level. The challenge for us is fitting them in. Giving them opportunities to play. Because the game unfortunately at that lower level with the rules, is very, very challenging. It’s hard to prepare them for AFL level. It is non-AFL like, what we’re seeing at the moment. That’s going to be an enormous challenge, our players are going to have to do top-up running because it’s nothing like AFL at the minute. The free kicks today [in a practice match between Richmond and Box Hill] at VFL level were laughable,” Hardwick said on Sunday.

“We’ve expressed our concern so it’s over to them really. We’re trying to prepare players for the very best competition in the world I think, so we probably need to have a lower league with probably the same rules, I would think.

“I think sanity would prevail at some stage, would it not?”