Jack Ginnivan turns 18 on December 9. But he's worried about inviting too many people over to his house to celebrate. And this has nothing to do with rules around social distancing.

The versatile midfielder/forward from Bendigo is hopeful that that particular Wednesday turns into a double celebration. It's the same day as the AFL draft, in which Ginnivan is in the mix to be taken. 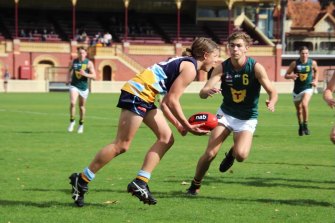 Bendigo’s Jack Ginnivan (with ball in hand) hopes for a double celebration on December 9.

But he is back training with his local club Strathfieldsaye and will be able to do a bit of work with the Bendigo Pioneers ahead of the draft.

"I get to train with some people that I hardly ever get to," he said of training at Strathfieldsaye.

With AFL list sizes cut and having been denied the opportunity to stake his claim, Ginnivan is mindful that things mightn't go his way on draft night.

"[I'm] pretty nervous at the moment. A lot of the year I was focusing on football, school was playing a little bit of second fiddle. But whatever happens on the night happens and you've just got to move on if it doesn't work."

He is mates with Port Adelaide's Kane Farrell and North Melbourne's Flynn Perez – both fellow Bendigo products – the latter of whom is advising him simply to keep working hard. He has also been counselled by Bailey Henderson, another ex-Pioneers player who missed out in the draft a few years ago and has since played with Richmond's VFL side.

Henderson has urged him to "make sure you have that 'plan B' so you can adapt if it doesn't happen."

Ginnivan made headlines six years ago when he kicked 119 goals in a season for Newstead in a team coached by his father Craig.

Jack reflects proudly on that feat, which Craig made sure only got so far.

"It's a pretty cool thing. Dad kicked 128 one year so he didn't want me to break that so in the last couple of games he always used to chuck me in the backline. It wasn't great!"

Other than training, preparing to get his driver's licence and seeing his girlfriend Christijana, who he hasn't seen much of lately while she's been focusing on trying to get into a university law course, Ginnivan has taken some shifts as a lifeguard to fill his time over the coming weeks now that his year 12 exams are finished at Bendigo Senior Secondary College.

He's also heading down to Melbourne this week for a combined Vic Metro and Vic Country training session; the last chance for Victorian talent to show their wares to AFL recruiters before the draft.

Away from football he's eyeing a career as a policeman.

"Me and my mum used to watch a lot of crime shows when I was younger. I've always watched that and thought it was pretty cool. My cricket coach is a cop [too]," Ginnivan said.