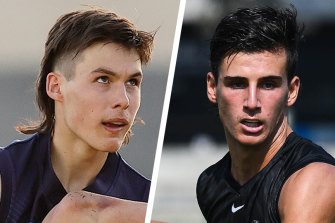 Every draft pick has a points value, on a sliding scale from 3000 points for pick one down to zero for pick 75 and beyond.

Why? Because clubs have priority access to certain players and the points system is the method of fairly getting them to those clubs.

Here’s how it works.

If a draft prospect’s dad played a certain number of games for an AFL club or state league, that club can gain priority access to that player as a father-son selection.

Then there are players who fall into the Next Generation Academies that clubs also have priority access to within certain allocated zones. These are players of Indigenous and multicultural backgrounds who are under-represented in the AFL.

The points system is how you get these priority players into clubs.

We’ll stick to father-sons for now and see how draft night might play out based on the draft order we have right now.

There are two elite father-son prospects this year. One is Nick Daicos. He is the son of Peter, Collingwood’s most artful player. Nick is a top five talent. The other is Sam Darcy, son of Luke, the Bulldogs ruckman and commentator. Sam is as tall as a point post and about as wide. He is also a top five talent. Daicos and Darcy will end up at Collingwood and the Bulldogs, respectively.

This gets a bit complicated, but it’s the AFL, what did you expect, simplicity? We’ll do our best.

Here is a scenario. This gets a bit complicated, but it’s the AFL, what did you expect, simplicity? We’ll do our best.

Pick 1. North Melbourne calls out Jason Horne-Francis. They don’t call out either Darcy or Daicos. They go with the kid they rate highest.

Pick 2. GWS. The Giants call out Darcy because he is the size and style of player they desperately want.

What happens next? The Bulldogs say, “Nah, he’s ours, we will match the GWS bid.”

Pick two is worth 2517 points. Clubs get a 20 per cent discount for their academy or father-son players, so the Bulldogs need 2013 points to match the GWS bid.

Right now the Bulldogs have picks 23, 43, 44, 45, 52 and 93. As it stands under this scenario the Dogs would need to use their first five picks to have enough points to cover a bid at pick two.

So, what happens? Those five Bulldogs draft picks come out of the draft and every other club’s draft picks shuffle forward, Darcy pulls on a Bulldogs jumper, shakes the coach’s hand and says, “I can’t wait to get into it.” His sad says, “I just love the way he goes about it.”

GWS then gets to try again. Pick three. They call out Mac Andrew. He is tied to Melbourne’s Next Generation Academy.

Can the Demons match this bid? No, they can’t. Last year they could but the AFL changed the rules, so clubs can only match a bid for a Next Generation player if that bid comes after the first 20 picks.

Because Darcy has already been drafted and the Bulldogs picks came out of the draft, Collingwood’s draft picks have shuffled forward several spots. Pick four is worth 2034 points and Collingwood get the 20 per cent discount, so that brings it down to 1628 points the Magpies need to match the bid. That equates to three of their draft picks (27, 36 and 46).

Those three picks come out of the draft, everyone else’s picks shuffle forward, the draft carries on. Collingwood welcome another Daicos.

At pick two, GWS call out Daicos’ name. The Magpies still get their father-son, but their first five picks are wiped out in the same way as the Bulldogs in scenario one.

The Bulldogs’ picks in this scenario then shuffle forward in the same way Collingwood’s did, and the Dogs only need three or four of their picks, and not five, to match the bid for Darcy. So, they are left with one or maybe two third-round draft picks.

What do they do both about it?

Why? Because several later picks can add up to more points than one early pick. The thinking is, trade your early pick for a few later ones and hopefully have something left over you can still use.

But there’s a catch. You also have to have enough spots on your list for all the picks you take to the draft. So, you can’t warehouse 10 draft picks to cover points if you only have a maximum of three places available on your playing list.

What happens now? The Dogs and Magpies, in particular, will trade draft picks between now and draft night. Both will probably trade their current first draft picks.

The Dogs trade pick 23 for a couple of draft picks and maybe a future pick. They will need to be watchful of how many list sports they have available.

Collingwood will most likely trade pick 27 on or before draft night for a future draft pick. Why? They will probably have enough points to cover a bid for Daicos without needing to use pick 27, so why risk seeing a valuable high pick wash away on a bid for Daicos if they have other picks that can cover the bid? They then have the choice of trading that new future pick back into this draft once they have brought Daicos in. Or they just hang onto it and use it next year.

And that is the point of the points.