Home » Rugby » Asiata ‘won’t be at Bulldogs next year’ if he can’t fulfil contract: CEO

John Asiata is under increasing pressure to make a call on his vaccination status, with Canterbury boss Aaron Warburton warning the Bulldogs recruit he will be sacked if he cannot fulfil his contractual obligations.

It means the Bulldogs are the first club to publicly declare they are prepared to axe a player who refuses to have the COVID-19 vaccination.

Warburton said Asiata’s Bulldogs contract began on November 1, when the group returned to pre-season training. Under current NSW COVID-19 rules, unvaccinated players can only train individually and will only be able to return to group training on December 15.

Even if the Bulldogs allow Asiata to remain with the group after that date, unvaccinated players are set to face issues travelling to NZ with both Queensland and Victorian government indicating unvaccinated will be unable to enter government stadiums.

“We won’t have someone in our squad that can’t fulfil their contractual obligations,” he told the Herald. ”And if they can’t fulfil that, then they won’t be there next year.”

When asked if Asiata had been given a deadline to make his decision, Warburton said it was a private discussion between him and the club. 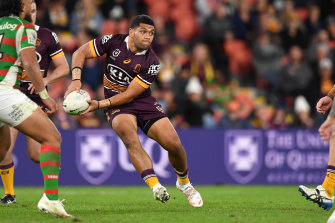 John Asiata is under increasing pressure to make a call on his vaccination status. Credit:NRL Imagery

Asiata is now the only Bulldogs player yet to have the jab, with English prop Luke Thompson recently receiving his first dose having initially been hesitant.

The strong stance from the Bulldogs boss comes a day after ARLC boss Peter V’landys declared the NRL was prepared to move forward into the 2022 season with a small group of unvaccinated players.

He said the cohort of around 15 unvaccinated players posed “little to no risk” to the rest of the playing group and insisted he would be happy for the NRL to follow NSW Health policy of accommodating a small unvaccinated percentage in the community in 2022.

Several high-profile players across a number of clubs are still holding out against the jab, including Manly’s Dylan Walker, Penrith’s Api Koroisau, Canberra’s Josh Papalii and Melbourne’s Nelson Asofa-Solomona.

Hawke said he hoped the club would not have to sack anyone over the vaccination, but said the team was prepared football-wise no matter the outcome.

“That’s our primary concern and hopefully through tuition on the medical aspect of the vaccination, they will come to the right conclusion,” he said.

“We are in a fortunate position where we have a number of players coming through our junior grades who are stepping up this year. That’s a really good sign, because we’ve got people coming through the system.”

The Panthers have already had a number of serious conversations with Koroisau but are welcoming back most of their squad on December 1.

Panthers chief executive said the club would not be making any definitive decisions until the players are due back at training and hoped the issue would be resolved in that time.

Cowboys star Jason Taumalolo previously indicated to the club he was also uncomfortable getting the jab. But with the Cowboys currently training out of a private facility those unvaccinated, or who have received just one dose, are able to train together while wearing a mask.

Push will only come to shove for the Cowboys in round one, with the club hopeful the rate will be 100 per cent by that point.