Wayne Bennett dismissed a possible return to the Broncos as little more than speculation as Souths celebrated securing the services of Alex Johnston for two more years.

Bennett was on Wednesday linked to a return to Red Hill by a News Corp report, which quoted Bennett as saying he would be humbled by the hatchet being buried in Brisbane after his messy departure at the end of 2018. 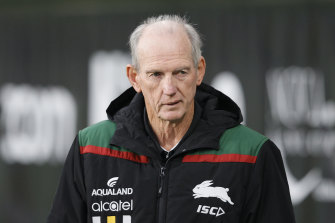 Wayne Bennett won six premierships with Brisbane and is often linked with a return to the embattled club.Credit:Getty

Bennett also denied he had come to an agreement with Souths to walk away at the end of this season, should he be able to secure his long term future elsewhere.

"No one at Souths has told me that. And that discussion has never been had here," he said.

"I’ve had no discussion with anyone about it. It was a speculative piece of journalism.

"I’ve had no discussion with anybody from Souths or Broncos or Queensland Rugby League – nobody.

"You can talk as much as you like about it but you’re not going to have me buy into that."

On field, Bennett and the Rabbitohs have been able to secure the signature of Alex Johnston for two more years.

The Souths junior was set to be forced out of the club due to salary cap constraints but has taken a significant pay cut to remain at Redfern.

"When we said (to the players) there was a pretty good chance he would stay on, there were a lot of happy players," Bennett said.

"We all make sacrifices here. You can’t build a really good team or a really good club without sacrifice. I’m sure there are a lot of other boys in the same boat as well.

"We’re just pleased to have him and pleased he can stay on. He’s a Souths junior and it’s really important to the club here that we could maintain that situation.

"It was certainly the most cheering and clapping I’ve heard for a long time in the change room."