At 4am, just hours after finishing fourth in the Western Bulldogs’ best and fairest in his first season, Aaron Naughton jumped in a car to go camping with his dad, Wayne. 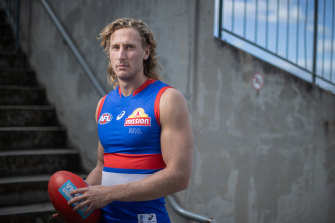 Where the then clean-cut Naughton was headed, however, is not a place known for its serenity as he made his way to the top of Mount Panorama to join the hordes of rowdy V8 fans watching Craig Lowndes and Steven Richards combine to win the Bathurst 1000.

His dad is a seasoned veteran on the top of the hill, having camped with friends there for about 30 races according to his son.

But for Naughton the experience was an eye-opener, a far cry from the formality surrounding a club best-and-fairest award nowadays.

“It is their grand final so it was pretty cool to witness, camping up there for four or five days and [it was] a special moment to have with Dad,” Naughton said. 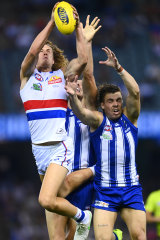 It was a question Naughton would be asked for at least the next two years as he settled into the forward role coach Luke Beveridge asked him to play despite his outstanding first season as a defender and his complete lack of experience in that part of the ground.

His breakout game arrived in round seven, 2019 when he took nine contested marks and kicked five goals against Richmond, prompting their coach Damien Hardwick to joke post-game that Jesus Christ would not have stopped him.

Naughton kicked 32 goals for the season and finished eighth in the club best and fairest.

But questions lingered, not because he hadn’t succeeded up forward, but because his first season meant he would be dogged with the perennial question – often directed at the coach – as to whether the Bulldogs would be better off with him behind the ball.

When Naughton heard the subject arise again externally in the pre-season his first thought was “oh no, here we go again” as at Whitten Oval and in his own mind the question has been well and truly answered.

He loves playing his role alongside Josh Bruce and housemate Tim English with the Bulldogs’ ability to score when he is targeted at 47.2 per cent, the best of the trio. He praised assistant coach and Eagles premiership forward Ash Hansen for helping him make the transition.

“My craft is developing,” Naughton said.

The tall trio is combining well with Naughton able to get up and down the ground more regularly in 2021 after being able to complete a pre-season for the first time.

Knee and ankle problems stymied him in 2020 and he struggled to build momentum alongside his new partner-in-crime Bruce, with both battling for consistency.

But this season they have benefited from playing in front of the Bulldogs’ talented midfield under new rules.

Naughton has averaged 7.5 marks a game while fighting fanatically for the ball when it hits the ground and he was critical in helping Bruce kick 10 against North Melbourne in round three.

The extra room inside 50 suits Naughton’s personality too, with his love of the outdoors keeping him grounded while his football takes off.

That love arose on a few hectares in Langwarrin, where he lived until he was nine, chasing his bigger brother Travis and a nearby neighbour around the property on PeeWee50 dirt bikes.

It translated into a love of fishing and the water when the family moved to the idyllic coastal town of Rockingham, south of Perth.

In the off-season he heads out on a little fishing boat before the sun comes up with Travis to drop cray pots, catching enough for a meal he prepares using tips gleaned from parents, Wayne and Gabby, who are both qualified chefs.

“We just drop big jarrah and steel pots. We are lucky the boat has a winch so we don’t have to pull 25-kilo pots up by hand anymore. We can just use the foot pedal and it comes straight up. It is lazy fishing,” Naughton said.

There is nothing lazy about the Bulldogs this season, though, as they have jumped from the blocks to win their first four games.

Naughton will play a key role in determining whether they can turn their midfield riches into premiership success, although he is not looking beyond Gold Coast on Saturday.

“The strong messaging among the group [is] to focus on the now and the process and the results will come … so we just keep rolling,” Naughton said.