Ross Lyon’s potential return to St Kilda as coach is gaining momentum after he met with the club’s top brass on Monday for more than four hours.

Saints sources told The Age that the meeting, which also included CEO Simon Lethlean, was productive, and St Kilda and Lyon will keep dialogue open. 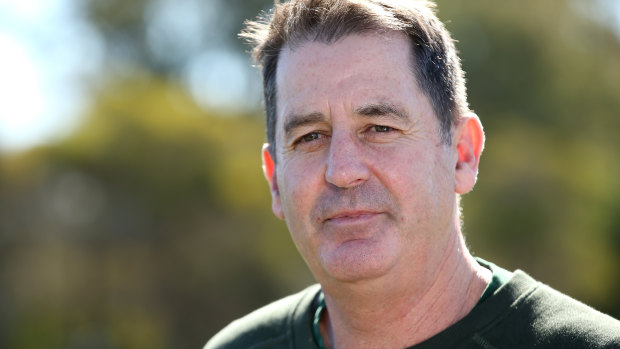 When questioned by Channel Seven about the meeting, a visibly excited Lyon could barely wipe the smile from his face.

That would be an understatement, considering he was linked with the Carlton and Essendon jobs in the past 12 months but decided against going through either club’s recruitment process.

In his media roles, the four-time grand final coach has publicly flirted with the idea of a third coaching stint and it now appears as though the itch is returning with a vengeance after his unceremonious sacking at Fremantle in 2019.

Lyon is the Saints’ second-most successful coach, having taken them to three grand finals, including a replay, back in 2009 and 2010.

But he abruptly left St Kilda at the end of 2011 to take the Fremantle job after a dispute over contractual negotiations.

Lyon guided the Dockers to their first and only grand final in his second year at the club in 2013.

The Saints have struggled badly to recapture the heights of the Lyon era in the past 11 seasons, having gone through three senior coaches since then and making just one finals campaign.

However, Lyon’s reign at Fremantle ended badly, with his last four years there yielding only 29 wins from 87 games at a 33 per cent strike rate.

Lyon’s career winning rate is 57 per cent from 305 games, including nine wins from 20 finals.