While both Nathan Buckley and Damien Hardwick stressed they were speaking after observing small sample sizes, they did not have to be prodded too much to speak about how two of the AFL’s rule changes might make footy look different in 2021.

There has been plenty of discussion about the new man-on-the-mark rule – players can not deviate from the mark at all, and if they do they will cop a 50-metre penalty. 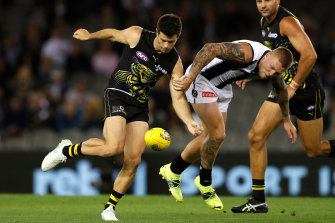 “Our efficiency was the same as Richmond … and they were low numbers. Fatigue can affect that as well.”

Buckley said 2021 loomed as a season of “real flux and change on field”.

“We have had a shorter preparation, soft cap for footy program has been cut by 40 per cent so the ratio of staff to players is very different,” he said.

“The games are back to full length and we are going with less rotations. And that [less pressure] will change the dynamic the game is played. I don’t think it is going to stay like that, you generally regress to a mean.

“But still fatigue and not hitting targets. Up and back a lot. The reality is that they [Callum Brown and Josh Thomas] are going to have to get midfield time as well to maintain fresh legs through the middle.”

Buckley said it would take five or six games to see where things settle with the new rules.

“We took 120 contested marks. That’s normally a two-game total for us,” he said.

“The ball moves a lot [more freely]. Sides are trying to use that 45 [degree angle] kick which has opened up with the man on the mark. We will see how the rest of the games go.

“I think sides are a lot more offensive-based at the start of the year anyways.

“It’s a small sample size so I don’t want to make too many assumptions … [but] it looks different. Last night’s game was up and back … a lot of inside 50s.

“It will be interesting to see where it goes.”

Both coaches said key players who did not play – including Taylor Adams, Brodie Mihocek, Tom Lynch and Dion Prestia – should be right for round one.