Home » Rugby » ‘Blatant penalty’: How the Roosters got lucky with winning field goal

The NRL is reviewing a series of block plays by the Sydney Roosters, including one that involved Sam Walker’s match-winning field goal against the Gold Coast Titans.

For all the headlines about Wayne Bennett and Ivan Cleary trading barbs over block plays, protecting playmakers and influencing officials before games, there was no uproar about Roosters pair Jared Waerea-Hargreaves and Victor Radley forming a wall in front of Walker before he nailed the decisive one-pointer in the 25-24 win. 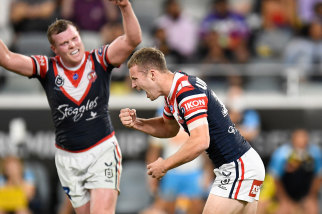 But it didn’t escape the attention of the NRL, which confirmed it would review the incident on Monday.

Under the NRL’s obstruction rules, it states: “If two or more players form a wall (side by side) next to the play the ball and don’t allow the opportunity for a defending player to move directly towards the player in possession, the referee will penalise for obstruction.”

The Roosters, who defeated the Titans 25-24 to book a semi-final against Manly, also made a point of getting two players to stand next to their teammate playing the ball in the 74th minute and 76th minute.

Former top whistleblower Greg McCallum was convinced the winning play should not have been allowed to stand, and that referee Adam Gee should have penalised the Roosters. 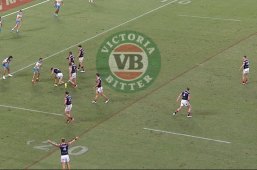 Jared Waerea-Hargreaves and Victor Radley form a wall as Sam Walker lines up for the match winner.

“I thought it was a blatant penalty with the successful field-goal attempt – there was a Roosters player in front of the play the ball, so he was offside,” McCallum told the Herald.

“They also had two players standing next to each other, which is also obstruction. That was clear-cut in my view.

“I know something similar happened with the Newcastle players a few weeks ago when they kicked a field goal, but they were staggered rather than forming an actual wall.

“I follow the game as closely as anyone, and if you set up a block play like the Roosters did, it’s illegal. The defending player needs to go around you and not through you.” 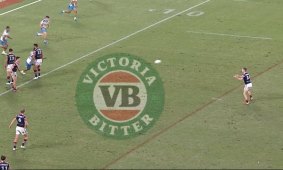 Victor Radley and Isaac Liu form a wall in the 74th minute for Sam Walker.

Titans hooker Mitch Rein was at marker and has to brush past the much bigger and heavier Waerea-Hargreaves to get to Walker who never looked like missing.

In the 74th minute, Radley and Isaac Liu also formed a wall with Liu seen moving to his right and contacting Erin Clark who successfully charged down Walker’s first attempt.

Waerea-Hargreaves and Radley are seen sprinting to the play the ball in the 77th minute, with Walker set up behind them to the right, only for the Roosters to spread the ball left.

The Titans could have still won the game with Patrick Herbert’s final pass for unmarked winger Corey Thompson flying into touch.

As for Cleary’s claims the referees risked being influenced by coaches and their pre-match comments, McCallum said that had never been the case, never would be the case, and referees were only worried about refereeing once the whistle was blown.

“When I was involved you expected it [coach’s comments] to happen, especially around Origin time and finals, but if you’re focused on refereeing none of it means anything,” McCallum said.

“Wayne Bennett very rarely made any comment. The only time he contacted me was when Karmichael Hunt first came into the game, he was contacted a fair bit, and Wayne said you need to protect him.

“But all the comments mean nothing to referees and officials. Like Wayne said, ‘it’s good theatre’.”

Penrith players were chipped more than once during play about not blocking Cleary when he kicked, despite not being warned all year.