Essendon have taken a punt on a former top 10 draft prospect, who has already suffered two serious knee injuries, adding key forward Kaine Baldwin to their rookie list ahead of the pre-season supplemental selection period.

The 18-year-old from South Australia was captain of the state’s victorious under-16 team and shaping as a high draft pick in the 2020 national draft, but a knee reconstruction, followed by a partial tear of the anterior cruciate ligament soon after he returned, saw him slide off draft boards in a season that saw fewer picks. 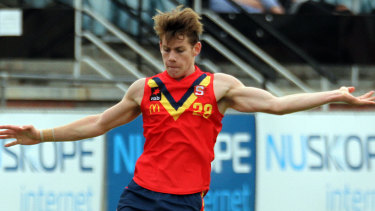 Although signing him for one season the Bombers did not hold back in their announcement with Richmond’s Tom Lynch and former Docker Matthew Pavlich cited as players that the state talent manager Tony Bamford had compared Baldwin to as a 16-year-old.

Essendon list manager Adrian Dodoro said the club’s medical team were confident Baldwin could overcome his knee issues and he expected him to be ready to play within months.

“He has overcome his fair share of adversity through injury in recent years, but we think he is a bright young talent who will offer plenty to our side,” Dodoro said.

“Kaine is an athletic young talent, who was touted as a first-round potential, and he has the ability to become an important, high-marking forward for us in years to come.”

Baldwin said he was rapt to get an opportunity after a tough couple of seasons spent recovering.

“It’s been a tough couple of years with the knee recovery, but I have put everything into my rehab to make sure I can get the most out of my body. I’m feeling really good now,” Baldwin said.

Baldwin is the second rookie added to the Bombers’ list via the SSP, with West Australia’s Alec Waterman signing with the club earlier this week.

Hawthorn also moved to sign Lachlan Bramble, adding the 22-year-old who played VFL for Williamstown before joining Box Hill at the start of the season, to their rookie list.

The running midfielder performed well in the club’s trial matches and is a strong chance to line up for the Hawks early in the season.

Meanwhile, Carlton remain confident Harry McKay (ankle), Jacob Weitering (hip) and Jack Newnes (ankle) will all recover quickly from the injuries they sustained against the Saints although will make a definitive assessment after the weekend.

St Kilda veteran James Frawley will be unavailable for round one after suffering a hamstring injury on Thursday night, with Jake Carlisle and Tom Highmore in the frame to replace him.