The Western Bulldogs expect to know the extent of a knee injury to star midfielder Marcus Bontempelli after he has scans in Perth ahead of their preliminary final against Port Adelaide.

The skipper spent the final desperate minutes of the one-point win over the Brisbane Lions on the bench after he copped a knock late in the game.

Bulldogs’ coach Luke Beveridge said it was difficult to determine the exact nature of the injury, with his availability a significant concern ahead of the club’s biggest match since the 2016 grand final. 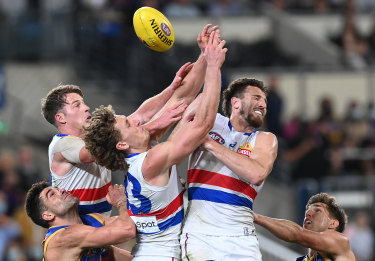 Marcus Bontempelli flies for a mark during the match.Credit:

“He is obviously a little bit sore,” Beveridge said.

“We will need a little bit of time before we can assess it. We will probably get a scan when we get to Perth and see if there is any damage in there.”

The Bulldogs will be without exciting forward Cody Weightman who was concussed late in the first half ruling him out of the match in the second half.

Beveridge said the skill set of the dynamic youngster who kicked four goals in the elimination final could not be replicated, but they had capable players who will get the opportunity they were waiting for in a preliminary final.

Awaiting in that preliminary final is Port Adelaide at home where they have been since the start of the finals series as the Bulldogs travelled to Tasmania then Queensland and now Western Australia. They expect to arrive back in Adelaide next Friday.

“We were in healthy nick prior to this game, potentially we got a couple of injuries tonight and we have had to shift some things around with our key forwards and the ruck situation but we are pretty healthy,” Beveridge said.

He knows they will need to even up the inside 50 count which they lost to the Lions by 14 with the coach paying credit to the defenders who kept them in the contest, with Taylor Duryea’s one on one against Charlie Cameron late in the game a defining moment for the former Hawk.

“I thought the backs really saved the day a number of times just to keep us in it,” Beveridge said.

“Sometimes this game is really cruel and sometimes it is beautiful. We were the lucky ones to feel the emotions of the latter.”

Disappointed Lions’ coach Chris Fagan said despite losing their second semi-final in three seasons by less than a kick he thought it was the team’s best year since they became a top eight team in 2019.

“We have had a little bit more adversity than we have had in the previous years,” Fagan said.

“I think we have shown a lot of character this year and I think it will hold us in good stead going forward. All these things really do.”

They lost Jack Payne and Jarrod Berry to concussion by half-time and were behind by a nose when the siren went.

“All these things in the end help you when you take the lessons from the result and figure out what you could have done better on the night,” Fagan said.

“We were all be flat. It’s been a rollercoaster year for us.”

Fagan refused to blame the loss of forwards Eric Hipwood, Dan McStay and then Payne late in the season after Cameron Rayner missed the season with a knee injury on them dropping out in straight sets.

He conceded that Joe Daniher was down in the finals series, unable to take the game by the scruff of the neck when needed, but said there are brighter days ahead for the 27-year-old who played every game in his first year at the Lions after three injury-riddled years at Essendon.

“Joe didn’t have the best finals series it would be fair to say but the fact McStay goes out of early in the game last week and he has two young forwards up there playing alongside him, it is a bit easier for the teams to focus in on Joe,” Fagan said.