Melbourne have revealed midfielder Angus Brayshaw will undergo foot surgery and miss the rest of the season but the Demons are confident of retaining free agent Jack Viney.

As they prepare for Saturday's must-win clash at the Gabba against Greater Western Sydney, the latter having dumped skipper Stephen Coniglio, the Demons said they had decided to put Brayshaw under the knife. 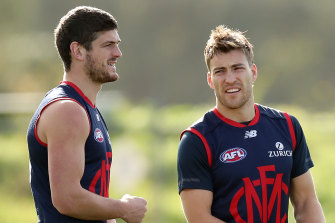 The Demons had been primed for a finals berth after holding on against St Kilda in Darwin in round 14 but successive defeats within five days to teams below them on the ladder, Sydney and Fremantle, have the Demons in 10th spot, a game outside the top eight.

Goodwin, who has also been under pressure along with the team, said the players needed to show greater "discipline" and show a "real commitment" to avoid lapses and play in a consistent manner of teams such as West Coast and Geelong.

"I am no different to the players. I need to make sure that I drive that internally to a really high level. That's everyone at our footy club – I am involved in that as well. This isn't just the players – this is right across the club to become a ruthless club that plays the same way week after week," he said.

"I am responsible for making sure that gets executed."

Viney, who was disappointed to lose the joint captaincy at the start of the season but remains vice-captain, is off contract. The 132-game veteran is a restricted free agent and Geelong have been linked to the hard-nut midfielder. Goodwin said the Demons were confident of retaining him.

"We are. I think it comes with the territory of being a free agent. Jack Viney is a quality human being and a quality player. If you were another club, of course, you would be interested," Goodwin said.

"But Jack is a passionate Melbourne man. We love Jack, he loves his footy club and we are confident that he will be at our footy club moving forward."

Forward Tom McDonald has endured a horrible year, managing only nine matches and seven goals. His form had dipped last year after the superb 2018 with 53 goals but Goodwin said McDonald remained a part of the Demons' plans.

"Tom is, obviously, going through a phase in his footy where he is not in super form at that's why he finds himself out of the team," he said.

"But he is a valuable player and a contracted player and the challenge for us and Tom is to get him back in form."

Goodwin also moved to clarify the future of Harley Bennell, who had not played a senior match because of injury for two years before joining the Demons over the pre-season.

He has played only five matches this season, and none since round 10, having but Goodwin said the former Docker had lifted his training intensity and agility "to move in and out of traffic" and expected the midfielder to be awarded a new contract.

"We don't see Harley Bennell as someone who is a short-term option for us – we see him as a long-term prospect," Goodwin said.