The Brisbane Lions have ticked Richmond off the list of teams to beat defeating the defending premiers for the first time since 2009 to charge into a home preliminary final in a fortnight.

They are now just one win away from a grand final appearance at home in a season that has belonged in Queensland and might yet remain forever the Sunshine State if the Lions can keep up the form they displayed against the Tigers in their first preliminary final since 2004. 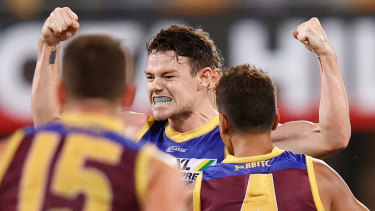 They had to sweat for the win however with Richmond charging in the final quarter as they tried to run down a 21-point deficit at three-quarter time. The Tigers drew within eight points with four minutes remaining – and could have been closer except for a goal to Shai Bolton being overturned when a review showed the ball had shaved the padding of the goalpost – before Hugh McCluggage snapped a goal to end the Lions' anxiety.

After an even first quarter it was a moment of madness from the Tigers just before half-time that transformed the contest.

Charlie Cameron had revved up the Gabba crowd when he jumped on his bike at a forward stoppage late in the second quarter, weaved through a narrow gap and kicked the goal from the chalk that connects the goal post to the point post.

He had just given the Lions a seven-point lead and a slight edge in a game both teams had controlled for periods without gaining a break. 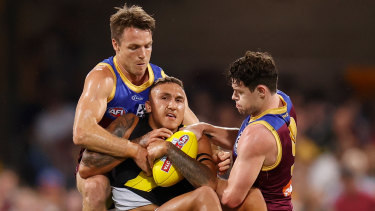 Got him: Shai Bolton under pressure.Credit:Getty Images

Richmond won the next centre clearance but Lachie Neale, the Brownlow medal favourite who had waited until the five minute mark of the second quarter to get a touch, won a free kick when last year's fairytale story Marlion Pickett threw the ball.

Shai Bolton lazily kicked the ball at goal well after the whistle to give Neale a 50-metre penalty but that was just the start of the drama.

As Neale strolled towards his new mark, captain antagonist Dayne Zorko drew Pickett in and was shoved to the ground for his trouble.

The umpire awarded another 50-metre penalty placing Neale tantalisingly within range of goal at the edge of the centre square. This was his moment and the season's best performer took it after a moment's hesitation, kicking a long and high goal to stretch the margin to 13 points at half-time.

The momentum was with the home team who have spent winter in their own beds and the Tigers suddenly seemed a a fair way from their own home as the Lions entered the long break with a lead against Richmond for the first time since 2007.

Everyone expected Richmond to respond but the Lions were out of the blocks early as the lightning fast Cameron kicked a goal when Cameron Rayner – who showed his class at critical moments – put him into space.

Their pressure was high as they forced Richmond into uncharacteristic errors, the Tigers' famous surges short circuiting rather than firing.

If it wasn't Harris Andrews fist getting in the way of their forward thrusts it was a tackle either from Jarrod Berry who was brilliant in the third quarter or Zorko who laid a tackle on Dion Prestia early in the final quarter that showed how desperate they wanted to reach a home preliminary final.

Tom Lynch's absence from the Tigers' forwardline was huge with Andrews able to control the defence, spoiling whenever the ball arrived high and creating an option for the switch kick whenever the Lions won the ball back.

Richmond could not find a regular avenue to goal and their famous finals performances seemed a thing of the past as they lost the contest with Dustin Martin subdued after an explosive start.

The Tigers now face either St Kilda or the Western Bulldogs in the semi-final with a trip to Adelaide as the prize while the Lions stay at home not having to had to leave their home state since midway through the year.