The Brumbies were forced to shell out $500,000 in player wages last week in the absence of an agreement on pay cuts between the players union and Rugby Australia.

As it emerged that RA were still paying off their legal settlement with former fullback Israel Folau and the code's pay dispute dragged into a third week, the Waratahs, Rebels and Reds were nervously watching their desk calendars as their own player pay cycles drew near. 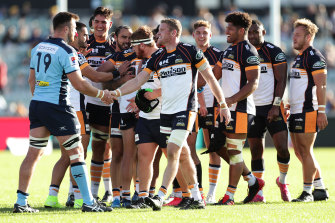 "I think he'll have a pretty mature approach once he's got everyone around the table we'll get something worked out in coming days."

Waratahs chairman Roger Davis, shouldering a $100,000 per week salary bill, said NSW would be forced to make its own call on cuts if the two parties could not reach agreement by week's end.

"It's been so badly managed by the parties that we may have to go it alone," Davis said.

"It would be normalised in line with the national agreement once there is one, but if you're talking about planning for 2021, we don't have a broadcast deal, we don't know how long we're going to have to survive in this operating environment with no revenue, so every dollar we save now helps us plan for a worst-case situation."

Meanwhile, The Australian reported that RA was still carrying Israel Folau's legal settlement on its books after agreeing to pay him in instalments last year.

The news means Folau, who tried to sue RA and the Waratahs for $15 million in damages over his sacking last year, would lose out if the game were forced into a voluntary administration scenario.

An RA spokesman would not confirm the report. The Herald understands the Waratahs also agreed to pay their portion of the bill, believed to be 50 per cent of an estimated $4 million, in instalments, but accounted for the full amount up front. Neither organisation has released its 2019 financials as yet.

Rugby Australia reported "positive and robust" talks with RUPA on Sunday afternoon, which was the first time both parties sat down to talk with the same financial data in front of them since Super Rugby was suspended three weeks ago.

"Representatives of Rugby Australia and the Rugby Union Players Association met again today and made good progress in the process of negotiating an emergency and interim pay deal in response to the global COVID-19 crisis," the organisation said in a statement.

"Talks were positive and robust, with both parties agreeing to continue to move negotiations forward with ongoing discussions scheduled for this week.

"Rugby Australia remains focused on securing a fair and reasonable deal with the players that will help protect the long-term future of our game.

"We also welcome recent comments by World Rugby as it assists all national unions [to] navigate through this very difficult time.

"The players understand that the burden must be shared by everyone in our game and we will look to reach an agreement which is fair and reasonable given the extraordinary circumstances we are in."