Rightly, the Western Bulldogs will be careful devising the punishment that is meted out to Lachie Hunter.

They have to gather facts, be satisfied of their veracity and then consider what kind of punishment will send the right messages to their players, supporters, sponsors, the AFL and the broader society. That there's no game on the horizon means they can hasten slowly.

The most difficult part of their decision will be whether to retain Hunter as vice-captain. It is much easier to give Hunter a suspension from playing – which they must – and refer him for alcohol counselling than to strip him of his new role as deputy to first-time captain Marcus Bontempelli.

The Bulldogs say Hunter has been a good citizen, suggesting that this incident is not the norm for the midfielder, who six days earlier was greeting, via Zoom, a kid with cancer during the Good Friday Appeal for the Royal Children's Hospital. 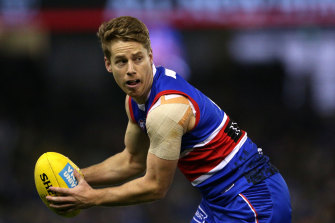 Given the difficulty that Hunter's drink-driving incident has created for the club and himself, Hunter should make it easier for the club's leadership by relinquishing the vice-captaincy.

This voluntary step would show contrition, while sparing the club's board, management and senior coach Luke Beveridge of laborious deliberations on how Hunter staying in the leadership role would impact on group dynamics in a challenging season.

A minimum suspension of three games would be appropriate and it is long odds that the AFL would accept anything other than a games penalty, the standard of the recent past. Gillon McLachlan takes a dim view of drink driving and while the police are investigating precisely what occurred and Hunter has the right to defend his legal position, there is no question a) that he was drinking, b) that he's crashed his car into four other vehicles and c) that he's been fined for not following social-distancing rules.

In a 17-game season, a penalty of three games is tantamount to four over 22 rounds, and four matches is the equivalent of five or six. But Hunter has to be suspended also for the AFL's sake – the league also having stressed the importance of social distancing and protecting the community.

Hunter did give his details to the people who were at the scene of the crash and, according to multiple sources with knowledge of the incident, got his young teammate Smith to drive him to another teammate Billy Gowers' place in South Yarra.

Hunter is insistent that he drank at Gowers' house – another way of saying he wasn't as blotto as his blood-alcohol reading (0.123) when he crashed. Gowers apparently has backed him up on that score.

That two of those parked cars belonged to the family of teammate Bailey Smith's girlfriend is a remarkable turn of events and one that the club has accepted as a freaky coincidence.

The Bulldogs must be relieved that, on what they know at this early stage, they appear to be dealing largely with a Hunter misdeed, and not a three-player pile-up. When this column first heard that there were three amigos in the chain of the events, it was natural to wonder if the club would soon be enmeshed in an Alan Didak-Heath Shaw type debacle. On what they knew on Friday afternoon, Smith was viewed as blameless and Gowers appeared to be in the clear, too.

If Hunter's drink drive is unwelcome, it does give the Dogs an opportunity to set stronger standards, and to keep a young and impressionable playing group on their toes during the torpor of the shutdown after a poor first-up game against Collingwood. It is well-timed – better to suspend a player early in the season than late.

The Bulldogs have never been as well-placed as a football club, in relative terms, as now. They have money in the bank, a strong and youthful playing list and a proven premiership coach. Their president Peter Gordon has been one of the leaders of the game's response to the COVID-19 emergency and it is a source of pride that the club is one of the minority that will be "unassisted'' – not on the AFL teet – during the shutdown.

They are positioned to take a stance that sends the necessary messages, without smashing Hunter by sending him down the river. That said, he should make it easier for all parties – including himself – by forfeiting the vice-captaincy first.