Having already poached Matt Burton and Jack Hetherington from the foot of the mountains, former Penrith assistant coach Barrett has added another weapon to his back line with the addition of the 25-year-old centre until the end of 2023. 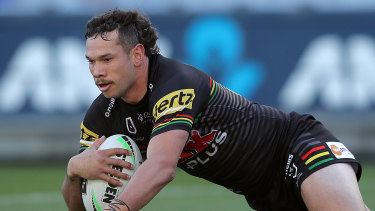 Brent Naden has signed a two-year deal to join the Bulldogs.Credit:Getty

Naden will join Burton and Storm ace Josh Addo-Carr at the club. Both are due to join the Bulldogs in 2022.

Naden hasn’t played NRL for the Panthers this year after testing positive to cocaine after last year’s grand final. He was given only a one-month ban, served over the summer, under a new WADA code which allowed for lesser penalties for positives to recreational substances in out-of-competition testing.