St George Illawarra is in the fortuitous position of having three of them on their books, which is why the club is about to make a huge decision on its footballing future that has nothing to do with their coach.

In Ben Hunt, they have a playmaker so likely to finish the season with the Dally M medal draped around his neck that most bookmakers refuse to frame a market. His halves partner, Talatau “Junior” Amone, is showing the benefits of learning from an experienced No.7 as he begins to establish himself at NRL level.

And then there’s the odd man out, Jayden Sullivan.

The Dragons are about to realise that three doesn’t go into two. Like Amone, Sullivan is a 20-year-old half with enormous potential, as evidenced by the club’s decision to sign him until the end of 2025. However, Sullivan’s pathway to the NRL is blocked by the two men in front of him, resulting in just six first-grade appearances, predominantly from the bench when Hunt was on State of Origin duty, so far this year.

Something is likely to give, and the Bulldogs may be the beneficiaries. 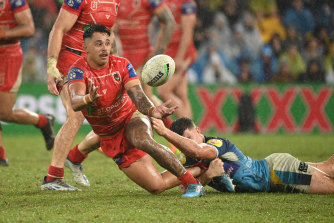 While the Red V was heavily criticised for some time for spending a whopping $6 million over five years to secure Hunt, the Dragons captain is finishing the contract strongly enough to warrant a new one.

Should the club offer him a new deal beyond 2023, as expected, it will prompt Sullivan’s management to request an immediate release.

The development won’t come as a surprise to the club hierarchy. Sullivan’s agent also acts for Amone and the parties have just completed a two-year extension for the latter. During the course of negotiations, it was made clear that he didn’t want his promising clients jostling for the one spot.

Sullivan is prepared to bide his time for now, but that will change the moment there are moves to extend Hunt’s tenure at the joint-venture outfit.

Several clubs in need of a halfback have enquired whether Hunt could be released early to join them next year, but the Maroons ace has no appetite to leave the Dragons before his deal expires. The former Bronco’s preference is to finish his career in the Red V.

As revealed by the Herald back in May, the Bulldogs have identified Sullivan as the playmaker they want. Given Amone has extended his contract and there’s likelihood of Hunt following suit, Sullivan could well be Matt Burton’s Bulldogs halves partner next year.

At one stage a player swap of Kyle Flanagan for Sullivan was floated – ironically premiership-winning coach Shane Flanagan, Kyle’s father, is a recruiter for the Dragons – but the move never got traction.

Flanagan junior has done a serviceable job during Canterbury’s mini-revival under interim coach Mick Potter, but Sullivan is considered the man to take the “Family Club” to the next level.

The Bulldogs are also looking for a fullback and the Dragons appear to have one too many of those as well. Tyrell Sloan will get a rare taste of first grade against Cronulla after being named on the bench, but has fallen behind Cody Ramsey and even utility Moses Mbye in fullback calculations. Sloan’s future may not be at the Bulldogs, but it mightn’t be at the Dragons either.

It could result in more upheaval at a club that has already had its share. Coach Anthony Griffin still has a year to run on a contract that some pundits feel shouldn’t have been extended. His side goes into Friday’s derby against the Sharks just one win out of the top eight, although their inferior for-and-against effectively means they are four points out of the finals.

The club also trying to find the right balance between blooding young stars Ramsey, Sloan, Sullivan, Amone and Max and Matthew Feagai, while ensuring they have experienced heads around them. Some believe the scales have tipped too much in favour of the grizzled, older heads.

How it all transpires from here will ultimately decide the future of the club and the coach.

Stream the NRL premiership 2022 live and free on 9Now.