Home » Cameron set to step out in Cats colours against Pies

Prized recruit Jeremy Cameron will line up for Geelong against Collingwood at GMHBA Stadium on Friday morning in his first hit-out against opposition in Cats colours.

His playing time will be managed during the clash as he returns from a minor hamstring strain suffered midway through the pre-season with Geelong sources saying he has been outstanding on the track in recent weeks. 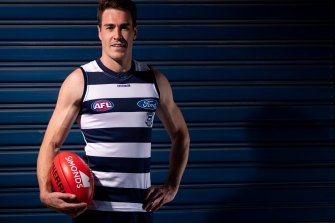 The 27-year-old forward joined the Cats on a six-year deal during last year’s trade period after kicking 427 goals in 171 games at the Giants.

Geelong was forced to trade for Cameron after the Giants matched the club’s offer with the Cats giving up three first-round picks in exchange for the forward and two future second-round picks.

They also picked up seasoned veterans Isaac Smith and Shaun Higgins from Hawthorn and North Melbourne during the trade period as they attempt to go one step better than last season when they finished runners-up to Richmond with Gary Ablett and Harry Taylor, who have since retired, in the line-up.

The durable Cameron had a disappointing 2020, kicking just 24 goals in 17 matches as he handed over his Coleman Medal title to his new teammate Tom Hawkins.

Meanwhile Luke Dahlhaus is beginning to make progress as he works to overcome a lingering foot injury with Geelong keeping an open mind on his return date.

He is back running and is expected to complete a big session on Saturday that will include players who don’t play in the practice match.

Patrick Dangerfield may be included in that weekend group as the Cats build him up slowly. However a decision on whether he plays on Friday is still being weighed up.

The 30-year-old has worked hard to overcome lingering niggles this off-season as he enters his 14th season, having played at least 19 games a season for the past 12 years.

Collingwood will be without Chris Mayne, who was concussed on Tuesday at training while Taylor Adams, who is recovering from a minor hamstring strain, is also likely to miss.

North Melbourne’s Ben Cunnington will miss Thursday’s match against St Kilda, as will Trent Dumont, who is in doubt for the opening round with a calf strain.

The Saints hope to play tall trio Paddy Ryder, Max King and Dougal Howard and are optimistic that Zak Jones, Dan Hannebery and Jade Gresham remain strong chances to play in round one.

Collingwood, meanwhile, confirmed Scott Pendlebury would captain the club for an eighth consecutive season in 2021.

The 33-year-old was runner-up in the Copeland Trophy last year and received the AFLPA’s best captain award.

Steele Sidebottom, Taylor Adams and Jeremy Howe will again be vice-captains while Darcy Moore was added to an expanded leadership group, rounded out by Brodie Grundy and Jordan Roughead. 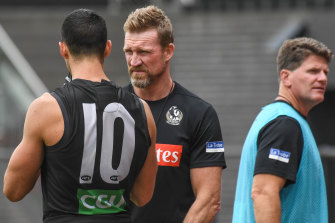