Another impressive St Kilda win has been soured by an incident involving Jake Carlisle, who is facing a possible fine after appearing to target the broken hand of Sydney skipper Dane Rampe in an off-the-ball scuffle.

The Saints ended an eight-year barren spell against the Swans with a convincing 53-point victory, continuing their enthralling rise up the AFL ladder and further cementing their status as genuine contenders. 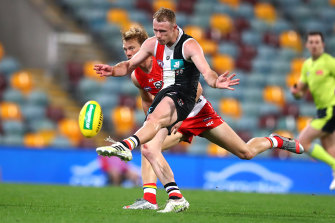 But Carlisle's unsavoury actions took away some of the gloss, with the key defender at risk of sanctioning for a third-quarter clash with Rampe, who had surgery on his hand during the week and played with it covered by a protective glove at the Gabba on Saturday.

Players from both teams were involved in a push-and-shove after St Kilda midfielder Zak Jones celebrated a goal against his former club, with replays showing Carlisle repeatedly attempting to strike Rampe's injured hand.

Kennedy was pinged for a free kick, with umpire Shaun Ryan describing his actions as contrary to the "spirit of the game", but received no further sanction. AFL guidelines allow for players to be fined for making "unreasonable or unnecessary" contact with an injured player.

In 2010, St Kilda's Steven Baker copped a nine-week ban for repeatedly targeting the injured hand of Geelong's Steve Johnson – who, on Saturday, sat in the Sydney coaches box as an assistant to John Longmire. 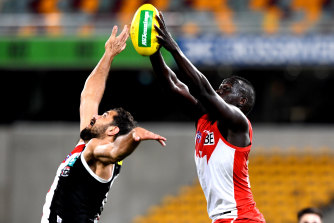 Outside of that one moment, there was plenty to like about Saturday's performance for St Kilda fans. Backing up last week's impressive victory over Port Adelaide, the Saints made light work of the depleted Swans, punishing them for their profligacy both in front of goal and around the field.

The 15.11 (101) to 6.12 (48) result is their third victory in a row, their sixth from nine games this year, and their first over Sydney since May 2012. It also marked just the fourth time since the AFL's restart that a team has posted a triple-figure score.

The Swans were coming off a quality win of their own against Hawthorn last week. They had their moments but failed to make enough of them count, and simply didn't have the class to keep up with the Saints, who kicked 6.5 to 1.2 in the final term to blast open the floodgates and throw off a nagging challenge from Sydney.

Days after making an emergency relocation to a Brisbane hub to escape the COVID-19 outbreak in NSW, the Swans made a bright start and took an early lead after first-quarter goals from Tom Papley and Tom McCartin, who finished with three goals.

But the Saints would kick the next six majors to assert themselves on the contest, making the Swans pay in clinical fashion for wasting a glut of attacking chances at the start of the second term.

Ollie Florent finally got one back for Sydney right on the half-time siren, his goal bringing the margin back to a rather flattering 22 points at the long break – a deficit they were unable to claw back.

In the end, it was the Swans' heaviest defeat of the year. Jake Lloyd and Luke Parker once again led the way, finishing as the two leading possession-getters on the ground, but there were too many passengers and not enough contributors in red and white.