There remains a chance round 12 matches will be played outside Victoria, as the AFL continues to work through a range of scenarios due to the seven day lockdown in Victoria.

The lockdown saw three round 11 games played without crowds, including the top of the table blockbuster between the Western Bulldogs and Melbourne.

Carlton were told to expect to stay in Sydney next week and play West Coast in the harbour town rather than at the MCG in round 12. Several other clubs await direction, with the AFL hoping to keep the fixture in place and change the locations of games if necessary. 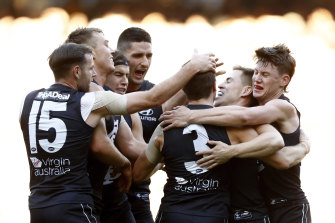 The Blues are likely to stay in Sydney for round 12. Credit:Getty Images

The Blues travelled to Sydney on Wednesday to prepare for Sunday’s match against the Swans at the SCG, with a club source confirming they would remain there for a week before playing the Eagles.

Carlton are one of three Victorian teams based there this weekend, with both Hawthorn and Richmond playing in Sydney.

The Hawks were scheduled to play Gold Coast at the SCG on Saturday night before returning to Victoria as they have a bye in round 12, while Richmond remained unaware of where they might head after their match against Adelaide at Giants Stadium on Sunday.

There is a chance the Tigers will fly across to Perth to play the annual Dreamtime at the ’G match at Optus Stadium rather than the MCG, with Essendon staying in Perth after they play the Eagles. However, AFL sources said nothing had been locked in as they attempt to rejig the fixture in a constantly changing environment.

Richmond coach Damien Hardwick said the Tigers would just wait for the AFL to tell them where to go to next.

”We have our bags packed and the expectation is we could be anywhere. Once again, we’ll deal with what we know right now and that’s playing Adelaide on Sunday,” Hardwick said. “We’ll worry about that when the AFL come back to us, possibly on Sunday night.”

Collingwood are set to play Adelaide in Adelaide in round 12 but the location of that match remains unclear with South Australia restricting travel in and out of Victoria. There is a chance Collingwood could be able to fly in and out of the state on the day of the game, however Magpies coach Nathan Buckley was told they were yet to be told.

Geelong are one of six teams due to have a bye. The Cats are not anticipating any change in their schedule.

The Brisbane Lions are in limbo as they await confirmation of their blockbuster clash with premiership favourite Melbourne. It’s considered unlikely the match will be played in Alice Springs as initially scheduled though given the two teams’ high standing the Lions are expecting the game to stay in its Friday night slot.

“I have no idea to be honest,” Lions coach Chris Fagan said when asked when the club expected a final answer.

“It will all depend on what’s going on in Melbourne with COVID. We’ll just wait and see. We’ll get ready to play on Friday night as far as we’re concerned.”