Another week without Tom Stewart, another statement made by Geelong. The Cats are shaping as the team to beat in 2022 after systematically dismantling Carlton to hand the new kids on the block a brutal reality check in the run to the finals.

Blues fans arrived at the MCG on Saturday night dreaming big but left under no illusions how much ground their team has to make up to challenge in September should they get there. 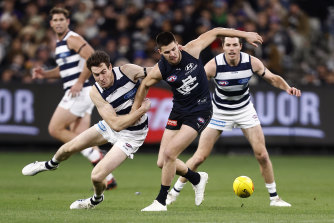 After outplaying Melbourne at their Geelong fortress last week, the Cats reproduced the goods at the venue where they will have to get the job done to deliver a second flag in the Chris Scott era.

The final margin of 30 points did not paint an accurate picture of the gulf between the two clubs.

It is a mark of Scott’s coaching nous that Stewart’s absence is not being felt by the Cats against finals contenders.

If there was a team to capitalise on the loss of the Cats’ defensive general, then it was expected to be the Blues with their twin towers of Charlie Curnow and Harry McKay.

Instead, the Cats’ backs were shielded by a relentless team defence, which smothered and choked the Blues, forcing them into error after error. 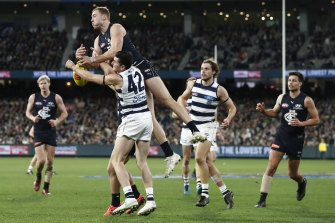 The Cats midfield, led by Joel Selwood and Cam Guthrie, beat the Blues at their own game. They set the tone in the first quarter, flexing their muscle at the clearances, and though the Blues won the contested ball count and had more of the ball they gained little territory.

Their back line was close to impenetrable in the final three quarters when they conceded just four goals.

On a day Nick Daicos strengthened his Rising Star claims, Sam De Koning reminded judges of his claims, blanketing reigning Coleman medallist McKay, who was held to just one behind and had zero impact. 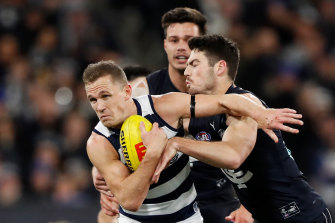 Tom De Koning lost the battle of the brothers but could leave with his head held high after a commendable performance in the ruck.

The Blues’ best period of the game came after they absorbed the Cats’ fast start to briefly dictate the tempo of the game.

Their midfield was given a taste of their own medicine with only Sam Walsh making any impact on the game.

Curnow was set for a big night with three goals by early in the second quarter but was starved of decent delivery from that point on.

It’s been six years since Zach Tuohy swapped the monogram for the hoops but Blues fans have long memories – and selective ones – booing the Irishman every time he touched the ball. Tuohy made sure they left the ground with hoarse voices, collecting 24 disposals in a composed performance across half-back. Perhaps the navy blue faithful are a little harsh on Tuohy, who played 120 solid games for the club but left after receiving what he described as an “insulting” contract offer from the Blues. In a complex trade deal, the Blues used the pick to secure Caleb Marchbank, whose career has been blighted by injury.

Sam Menegola will miss the Cats’ road trip to Port Adelaide after being subbed out with concussion. The Cats midfielder suffered the injury after hitting his head on the ground in a tackle from Will Hayes in the first quarter. It meant Jed Bews, who was having his workload managed, ended up playing a lot more of the game than the Cats would have planned. Mid-season recruit Hayes, in his first full game for his new club, is likely to come under the scrutiny of the match review officer.