Adam Cerra has officially nominated Carlton as his preferred destination after deciding to return to Victoria after four seasons with Fremantle, but negotiations for the young Docker are set to drag.

The former Dockers midfielder played 76 games with Fremantle after being pick five in the 2017 national draft with the Blues confirming to The Age that he had told them of his decision on Wednesday. 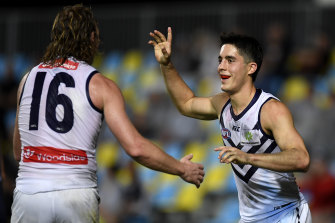 Carlton are expected to hand over pick six for the exciting youngster but negotiations are expected to drag with the Dockers keen to receive more in exchange for the 21-year-old. However, the Blues don’t think they should relinquish their second-round selection (currently pick 25) to secure Cerra.

His decision completes a good week for the embattled Blues with Michael Voss appointed senior coach just days after former Geelong CEO Brian Cook took over from the departing Cain Liddle with both men signed on three-year deals.

Cerra will join a young midfield that includes 20-year-old star Sam Walsh and co-captain Patrick Cripps. The Blues announced on Wednesday that they had also extended big-bodied midfielder Matt Kennedy’s contract until the end of 2022.

The Blues are also expected to secure Sydney’s restricted free agent George Hewett as they look to add depth to the midfield under Voss.

Carlton are set to lose Sam Petrevski-Seton, who has indicated a desire to join West Coast, while they are yet to renew Lochie O’Brien’s contract.

The Dockers already have pick eight and are likely to head into their third draft in the past five seasons with at least two top 10 picks, following a very similar recruiting model to the one Melbourne developed on their way to a drought-breaking premiership.

AFL trade 2021: Stay across the moves, news and what it all means as our Real Footy newsletter goes daily for trade period. Sign up to get it here.