Queensland captain Daly Cherry-Evans has spoken about the “presence” of coaching greats Wayne Bennett and Mal Meninga after producing a man-of-the-match effort in one of the greatest upsets in State of Origin history.

Cherry-Evans was named the best on ground after helping to turn a 10-0 halftime deficit into an 18-14 win at the Adelaide Oval. Bennett, in his latest stint as Maroons coach, instructed his side to be more “direct” in the second stanza and his charges duly played their part. 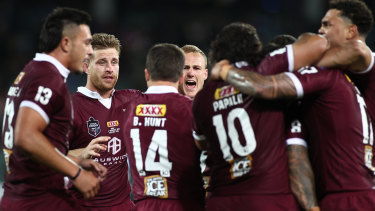 The Queensland debutants showed they weren’t overawed by the occasion. Two of them, Kurt Capewell and AJ Brimson, combined brilliantly to score one of the great Origin tries. Capewell kicked ahead for the Gold Coast fullback, who won the race for the ball in the in-goal.

“It was good,” Capewell said. “Lucky to get that break and AJ to back it up on the inside was good.”

The Panthers forward, playing in the centres, said he backed himself to put boot to ball.

“It is something that you never forget as a kid and I back myself every day of the week,” Capewell said.

Capewell was unable to finish the game due to injury. “I had a bit of a tight groin and it seemed to get tight in the end and I wasn't moving too well and decided to get someone else out there,” he said.

It has been a big week for Cameron Munster. The Storm star joked he was having “withdrawals” after pulling himself away from premiership celebrations.

“There is a lot of hunger in that group and no-one gave us a chance tonight,” Munster said. “We just dug deep and you would know that, just completing sets and kicking to the corners and that is what we did.”

Munster was one of the senior voices keeping his side composed when a late Josh Addo-Carr try raised the prospect of a NSW comeback.

“I was pretty much swearing, ‘Boys, you can't lose it,’ Munster said. “We need to dig deep and the Blues are a great outfit and they can score all over the field. We just needed to get up.”

Xavier Coates, who scored a crucial try, was still coming to terms with his dream debut. “Honestly, it is one of the best feelings in the world,” Coates said. “Like, I honestly don't know how to describe it. Ooh man, this is unreal.”