Home » Rugby » Chook raffle: How you can have your business on SBW’s jersey

From the barber and the butcher to the cafe owner and cleaner, a struggling small business owner will now have a chance which can only be deemed a marketer's dream – a slice of Sonny Bill Williams' jersey.

On the same day the cross-code superstar finally left his quarantine apartment with his wife and four kids after a two-week stay, the Roosters are offering a COVID-19 affected local business a branding opportunity like no other. 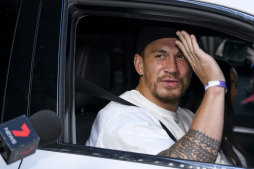 "Unibet has been a proud supporter of the Roosters for the last three years," Unibet's general manager Nathan Reeves. "The Roosters touched base with us very early in the piece and we immediately agreed to forego the space to remove any barriers to Sonny’s return.

"While respecting Sonny’s decision, we did not want one of the world’s most recognised athletes to run out with a blank space across his back.

"After talks with the Roosters, we settled on donating this valuable piece of sponsorship to a charity and give a once-in-a-lifetime opportunity for a small business to have their name emblazoned on the back of an all-time great.

"A lot of small community businesses have done it incredibly tough over the last couple of months. These are the mum and dad operations that are the backbone of our local communities. The support that these businesses give to junior sport is on show every week in their sponsorship of teams all over Sydney and Australia."

The space on Williams' jersey will be donated to Gus Worland's Gotcha4Life non-profit organisation, which raises awareness about mental health, after his first two matches back.

Unibet will also donate $10,000 to the local business winner and Gotcha4Life.

Williams left his Pitt Street apartment on Thursday afternoon, just hours before the two-time defending premiers clashed with the Storm.

The club had Williams using yoga mats, a watt bike and a headless padded mannequin during a day-on day-off training regimen during his 14-day stay.

He is expected the join the Roosters' biosecurity bubble on the weekend once he passes household screening and a medical assessment.

Injured lock Victor Radley has been using Zoom calls with Williams to bring him up to speed on Trent Robinson's plays. The coach is coy on how he will use the superstar upon his return.