The issue was raised during a phone hook-up with chief executives during the week, club bosses telling The Sun-Herald it was important the ARL Commission give it serious consideration given the game’s financial pie would be divided 17 ways following expansion. 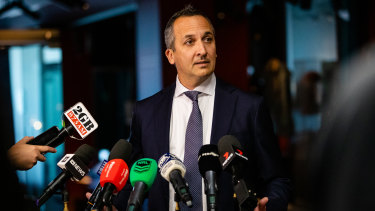 Franchise fees have been raised by rugby league officials in the past and are common in world sport. The Houston Texans paid $700 million to join the NFL in 2002, while Sacremento and St Louis reportedly shelled out $200 million to play in the Major League Soccer competition from this year. Even the Canberra Raiders were forced to cover the accommodation and travelling costs of visiting Sydney clubs when they were admitted into the NSWRL competition in 1982.

NRL clubs have been hit hard by the COVID pandemic and plenty are still operating in the red. They are concerned about what a newcomer will mean to their bottom line and playing stocks.

Any new TV deal is likely – but not guaranteed – to increase with the addition of a new club playing out of Brisbane, which means more money will flow back to clubs. But some CEOs say it is only fair Redcliffe, Brisbane Firehawks or the newly merged Brisbane Jets, who are all vying to be the 17th team in the NRL, compensate the clubs who have helped make the NRL competition what it is.

At least one of the Brisbane franchises scoffed at the idea of having to pay such an entry fee, telling The Sun-Herald: “We’ve already spent seven figures attempting to enter the game and to pay for that privilege is a big ask when a lot of the clubs are already being propped up by the governing body because they’re not running successful business models.”

But a prominent chief executive at a Sydney club said: “The benefits of imposing a franchise fee is it helps create an investment fund for the ARL Commission, which could help safeguard the finances of the league in the event of another pandemic or similar event.

“Alternatively, the fee could be a dividend to the 16 clubs who have already helped create a competition that is so valuable.”

Another CEO added: “You couldn’t see the fee too high because nobody will pay it. Somewhere between $2.5 million and $5 million would be fair. A lot of clubs have already done the heavy lifting by developing players. So why should we be left out of pocket?

“It’s not so much being out of pocket that worries me, it’s the fact the new franchise will poach our players.”

Abdo indicated to the chief executives he would raise the issue with the ARLC.

Expansion speculation cranked up at the start of the week when ARLC chairman Peter V’landys told the Herald: “It’s very realistic to say that we’ll have a second team in Brisbane in 2023. From what I’ve seen and the presentations that have been given to me, they are well advanced. If I said 2022 they’d be ready. They’ve been doing work for years. There’s no reason why we can’t be up and running in 2023.”