Coming off their first win at the MCG since 2014, the Lions are full of self-belief, riding the wave of momentum as they take on the more experienced Geelong on Friday night to secure the first spot in the AFL grand final.

Everything you need to know about Friday night’s preliminary final between Geelong and the Brisbane Lions, as they battle for a grand final berth.

How does Joe Daniher’s return change things for the Lions?

When the news of Daniher’s withdrawal from the semi-final broke, I thought it would be difficult for the Lions to kick a winning score against Melbourne. But Eric Hipwood stood tall, winning the battle against Steven May and finishing with four goals. 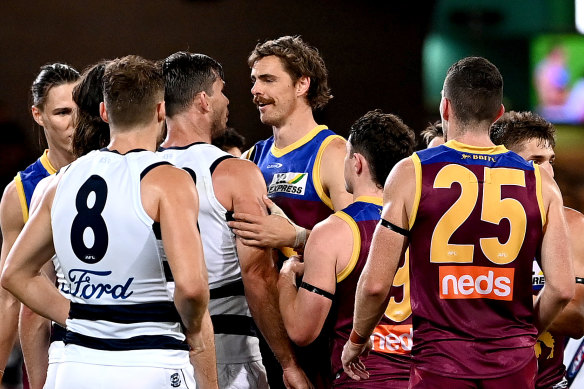 Nevertheless, the Lions will welcome Joe’s return, which gives them greater confidence moving the ball forward against a Geelong defence that is equally good in the air. Structurally, Daniher will give much-needed relief up the ground and may pull some of Geelong’s defenders further up the field.

This could have an impact on Geelong’s defensive shape behind the football. I anticipate the Lions will play fast and direct footy, to give their key forwards the chance to compete one on one. If the Lions play slow, it will suit Geelong’s retreating defence.

Will Lions full-back Harris Andrews line up on Tom Hawkins or Jeremy Cameron, and how will that work out?

I expect Andrews to line up on Hawkins who plays closer to goal, rather than Cameron who likes to get his opponent up the ground and beat them back on transition. Darcy Gardiner or Jack Payne are likely to get the job on the in-form Cameron. 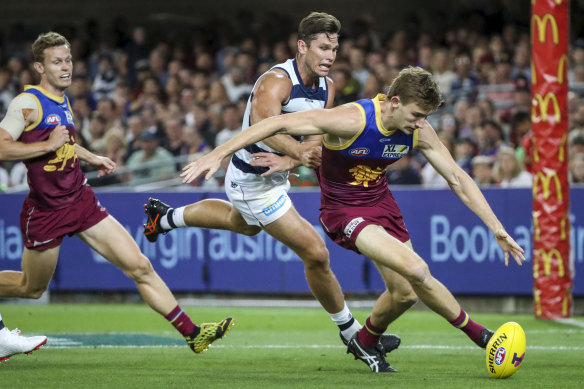 Hawkins will be a crucial contributor for Geelong, as he’ll do a lot of his work off the ball. That will go unnoticed by most but may draw Andrews into less dangerous spaces to limit his impact. Hawkins is one of the most unselfish players in the competition, so he will sacrifice part of his game to allow his other forwards opportunities to score. If Gardiner or Payne get the role on Cameron, they must continue to put body pressure on him, when he’s working up the ground and on his way back to goal. Those constant hits and bumps will make it hard for Cameron, whose athletic profile makes him a tough match-up.

Who are the wildcards for each team, the player who could ignite the game?

Zac Bailey is one of those players who makes things happen when he is around the ball. The smooth mover has the X-factor and Geelong will want to put some time into him, especially around goals where he does the most damage. He can stand up in big moments, as shown on multiple occasions already in his short career. Often overshadowed by the likes of Lachie Neale, Hugh McCluggage and Charlie Cameron, Zac Bailey is a “get the job done” kind of player and will give the Lions a spark when they need it most. 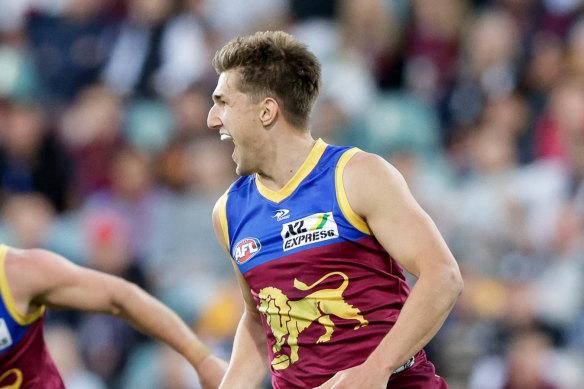 Zac Bailey is a wildcard for Brisbane.Credit:AFL Photos

Geelong’s wildcard, Gary Rohan, can provide the energy to lift his side. His finals form isn’t something to write home about, but his game against Collingwood, which put his side into a preliminary final, was enough to shake off any doubts.

He is a hard match-up, due to his strong overhead marking ability, but then has a turn of pace that is any small defender’s worst nightmare. He can use his pace defensively, often laying big chase-down tackles. If he is finding it challenging to impact offensively, you might see his pressure lift and bring on one of those team-lifting tackles.

To tag or not to tag Lachie Neale?

Neale’s form is too good not to run a tag on him. His season to date has been elite, but players like him find another level in the bigger games. The versatile Mark Blicavs has won many battles against some of the competition’s best midfielders this season, so look out for that tantalising match-up. If Blicavs was to go to Neale, Geelong would need to be mindful of the impact of McCluggage, whose stoppage and contest work is up there with the best in the competition.

There isn’t an obvious tag for Jarrod Berry, who will play after the tribunal overturned his ban for misconduct on Clayton Oliver, but I’d suggest he’ll play more defensively at stoppages and use his bigger body to create space for the Lions’ more offensive midfielders. 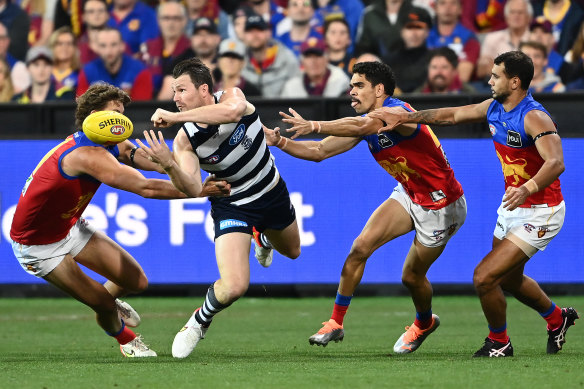 Patrick Dangerfield in action against the Lions.Credit:Getty Images

If Patty Dangerfield starts to have an influence, you may see Berry try to shut him down at stoppages, then push forward when the Lions win the ball to see if Dangerfield wants to go with him.

What coaching moves should we look for from Chris Scott and Chris Fagan?

Brisbane’s Dan McStay may need to play a negating role on Tom Stewart. Stewart is arguably one of the best intercept and rebound defenders in the competition and is often the player to kick-start Geelong’s back-half ball movement. If McStay can keep Stewart quiet, it will stifle the Cats’ transition from defence.

To exploit the Lions’ defence, watch for Geelong ruckman Rhys Stanley pushing forward after stoppages to create an extra tall target up forward, and making it difficult for Brisbane’s defenders to come off their opponents to intercept.

My tip: Geelong by 12 points. Click here for all our experts’ preliminary finals tips.