Sunday’s last-gasp win against the Springboks may have been Quade Cooper’s finest performance in 71 Tests for the Wallabies, but the playmaker will remember the match as his ticket to Australian citizenship.

The Herald on Monday revealed Cooper is set to be awarded Australian citizenship after Immigration Minister Alex Hawke announced a policy change which will allow “most talented prospective Australians”, such as Cooper, to be granted citizenship. Cooper had previously been rejected four times.

But while the news is good for Cooper, his former Wallabies halves partner Will Genia could have to wait another seven years to secure an Australian passport.

Genia and Cooper currently play for the same club in Japan and spend the majority of their year there. Genia, who played 110 Tests for Australia, plans to play another three seasons abroad so despite being a long-time resident, the PNG-born star will still be ineligible given he is no longer a Wallaby.

“First and foremost, I’d just like to give my thanks to [Senator] Kristina Keneally and her office for going into bat for me. And the Australian public,” Cooper said.

“The Australian public put a lot of pressure on the government not only in my case, but, a lot of other people that have fallen in the same position. It’s something that’s not over the line yet.

“It’s great to see the law and the rule amended to make it a little bit easier for us but the process is still ahead and until I get that, I will just continue to put my focus on football. But I’m truly grateful to the Senator Kristina Keneally, the Australian public and my teammates and obviously, our coaches, as well. 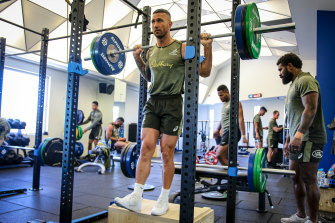 Quade Cooper training with the Wallabies on the Gold Coast.Credit:Andrew Phan/Wallabies media

“Without playing that game, it may not have been able to come to fruition.”

“You just continue to try, be persistent with that and if it comes to fruition in the next couple of days, weeks or even months, as I said, there is more to being an Australian than just a piece of paper. It will be a little bit of a cherry on top but it’s not over the line yet.”

Cooper hopes the amended rule will provide light at the end of the tunnel for other Australians, such as Genia. But without a recall to the Wallabies the halfback may have to wait until 2028 until he can become a citizen, four years after retirement.

The sticking point relates to the fact Genia must not have been overseas for 12 months all up in the four-year period before applying. And while Cooper will benefit from the changes allowing more flexibility for overseas-based “exceptional” Australians given he is a current Wallaby, Genia played the last of his 110 Tests in 2019. 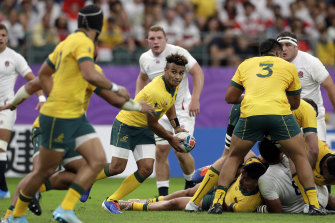 Will Genia passing in the 2019 Rugby World Cup quarter-final.Credit:AP

Adam Byrnes, a former teammate of Genia and Cooper at the Queensland Reds, is the principal immigration lawyer of Visa & Citizenship Lawyers and is advising Genia. He believes there is an easy solution.

“His advice is not to apply for citizenship at this point in time because he doesn’t meet the requirements,” Byrnes said. “What I don’t want to see is an exception made for someone who is currently playing for Australia and then Will may miss out because he’s not longer currently playing for the Wallabies. I want to see both my mates granted citizenship if there is an amendment to the legislation.

On the field, Cooper is set to keep his place in the Wallabies’ starting XV.

The 33-year-old is wary of the wounded Springboks, who have not lost back-to-back matches since 2018.

“As a team, (it’s about) being on that high and understanding it for what it is,” Cooper said.

“Not thinking that from that point on, we’re world beaters. They’re the best team in the world.

“For me, it was just really understanding what that moment meant and move on to the next.”

Stan Sport is the only place to watch every match of The Rugby Championship, continuing this Saturday with Wallabies v South Africa and Argentina v New Zealand. Both matches streaming live, ad-free and with extended coverage from 4.45pm AEST.