Boyd Cordner is set to be ruled out of the second State of Origin series following his latest head knock.

Cordner’s playing future has been the subject of speculation after suffering the latest in a series of blows to the head in the Adelaide encounter. When the NSW team for game two in Sydney is officially announced at 4pm Friday, Cordner is set to be omitted. 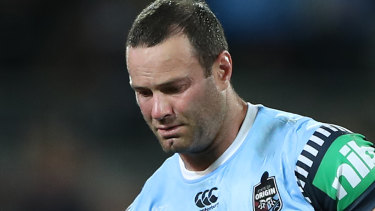 The NRL were understood to be weighing up forcing Cordner to be assessed by an independent doctor before taking his place in Sydney next Wednesday had he been named.

Cordner has a history of concussions, including one against the Storm which resulted in him missing five matches earlier this year.

Politis said Cordner and Robinson would have a good conversation about giving the backrower an extended break.

Cordner is contracted to the Roosters until 2023, but there is growing belief he may try and lead the Kangaroos to victory at next year's World Cup – provided the tournament goes ahead – and then reassess his future.

Meanwhile one of the big selection debates will be whether to stick with Nathan Cleary and Luke Keary in the halves for game two, or name Cody Walker in the No. 6 jersey.

After initially calling for Keary to be punted, immortal Andrew Johns told the Herald: "The more thought I give it, the more I'd like to see how Keary and Cody would go. More experience and Nathan's had a long year. He's young as a halfback at club level but in terms of Origin he's a baby. This is the next development for Nathan as a halfback: create under pressure, under fatigue, with his team on the back foot."