The announcement on the day before Christmas Eve that 2021 will bring the inauguration of the Rainbow Cup should have been a massive story in the rugby world. Yet incredibly, mainly because of the timing, the news largely flew under the radar.

The details of the 57-match tournament between the four South African Super Rugby teams and the 12 Europe-based Pro14 teams are pretty straightforward. 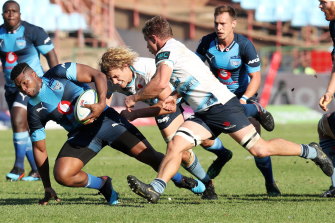 The Pro14 will wind up with its final in late March, and then, starting on April 17, its 12 teams plus the Bulls, Stormers, Lions and Sharks will be split into two eight-team conferences.

Given the ramifications of this tournament, which is a precursor to an expanded Pro16 featuring the four South African sides for next season, it is astonishing that there has not been more discussion around the implications of rugby's first cross-hemisphere club league.

It has been obvious for some time that Super Rugby has issues, with dwindling crowds and player burnout from operating across seven time zones a key reason behind top SANZAAR players heading to Japan and Europe. The financial and player welfare rationales behind South African sides playing in the same time zone against European sides are obvious.

For the Pro14 this coup could transform a league which has operated in the shadow of the English Premiership and French Top 14. The financial benefits of access to the largest television market in Africa, and a country where rugby is the leading sport, are clear, as is South African rugby's access to the wealthy European market. Pro14 playing standards will rise dramatically, while the injection of money should help player retention in South Africa.

When it comes to playing standards, the Pro14's European clubs will need to up their game significantly, but the South Africans also believe it will help them raise their game. Indeed, Springboks coach Jacques Nienaber has been very positive about the upside of South African players being challenged by new referees, game approaches and interpretations. He sees the northern hemisphere game as closer in style to Test rugby, so thinks the exposure will benefit his players.

Yet the Rainbow Cup also has more far-reaching implications as a tournament with the potential to usher in the holy grail of a global season.

The most striking thing about this bold move is the speed at which it has happened. COVID-19 – which caused the South Africans to be jettisoned from Super Rugby – was the accelerant, but it shows the game's administrators can move quickly if it is in everyone's best interests. This could also be a template for moving swiftly elsewhere.

Another key factor is the thread which could eventually weave together a new future for rugby. Private equity company CVC now owns a significant minority of the Six Nations, English Premiership and Pro14, and it is safe to assume its eye-watering investment in the game is because it believes there is the potential to make money. Its previous route to sporting enrichment is instructive, with CVC turning its £1.8 billion investment in Formula One into £8 billion over eight years. 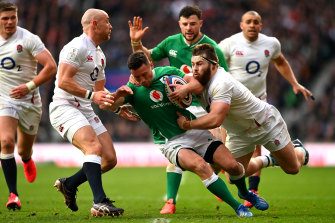 There has been persistent talk of the Springboks joining England and Ireland in the Six Nations in future.Credit:Getty Images

It did so primarily by ratcheting up the amounts paid for television rights. CVC is an agent of change, and as a major partner in the Pro14 will clearly have had a say on the decision to launch the Rainbow Cup. It will also be seeking to promote financially advantageous change to the Premiership and Six Nations.

Innovative thinking can move mountains. For instance, SA Rugby recently committed the Springboks to play in the Rugby Championship until 2030, but with its four major teams now part of the European season, why not play in the Six Nations as well? CVC would no doubt be keen.

And where does a prospective Pro16 leave the Champions Cup? If the four South African sides become part of that infrastructure, it will produce a better tournament and significantly increased revenues.

There will also be unintended consequences from the Rainbow Cup and Pro16, which have the potential to kick-start change in the English game. This is especially so as Nigel Melville recently started as executive chairman at Premiership Rugby after being director of professional rugby at the Rugby Football Union.

Melville is an open, innovative thinker who has a world perspective after many years with USA Rugby.

Melville was brought in at the behest of the clubs, with CVC's agreement, and will have a remit to look at ideas such as conferences to allow an expanded league, expanded play-offs, and an end to relegation (or, failing that, an annual play-off with the Championship). There are concerns that the Premiership and Top 14's dependence on benefactors is unsustainable and unwise, so the Pro16 could provide a template for change.

World Rugby will also be looking on to see what lessons can be learnt. Cross-hemisphere rugby is not without its challenges, as anyone who has played in Durban's subtropical heat in January can attest, but the potential benefits of evolution are incredible.

The Rainbow Cup could mark a watershed for world rugby. The next 10 years could be a transformative era for the game. We live in interesting times.