Ex-England captain Matt Dawson on Cameron Redpath turning his back on the red rose, taking flak off Scotland fans and why the visitors CAN win their first Calcutta Cup at Twickenham for 38 YEARS

Given the spiky nature of his own personal relationship with the Tartan Army officer class, you might expect Matt Dawson to rail against any turncoat willing to swap the red rose for a damned thistle.

Yet the former England captain is as understanding of Cameron Redpath’s decision as he is admiring of the youngster’s ability.

An old sparring partner and direct opposite number of Cameron’s dad Bryan during their own playing days, Dawson makes only one cheeky observation about Redpath junior’s switch of allegiance. 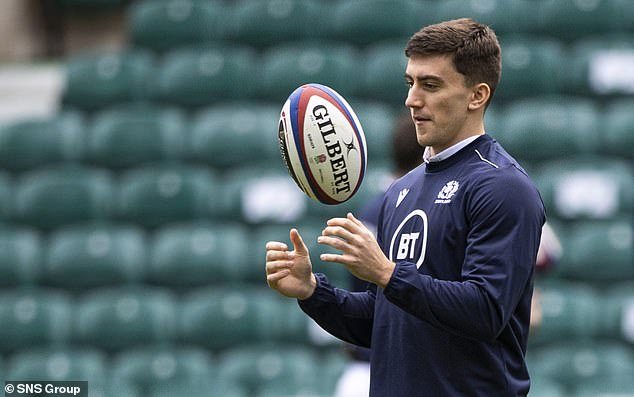 ‘Cameron is a lot more talented than his dad,’ he tells Sportsmail, quickly adding: ‘In fairness, I saw his dad admit that himself.

‘Basil (everyone’s nickname for Bryan) was slightly ahead of his time as a scrum-half, the way he was playing the game.

‘So I can understand Cameron playing in midfield because, when he was a young lad, his dad would have been teaching him all those skills to get past players.

‘And I’m not surprised he wants to play for Scotland. I know he grew up in England and played up to the 20s. But, if your father has played for Scotland, I can understand it being the ultimate dream for him.’

It’s still unusual to find players crossing this sporting divide. In the 150th anniversary match, the rivalry remains as strong as ever. Because everyone has their own personal history with the fixture.

‘The Calcutta Cup matches would have been one of the first Five Nations games I saw back in the 1980s, with my dad; I remember him taking me to Twickenham,’ said Dawson. 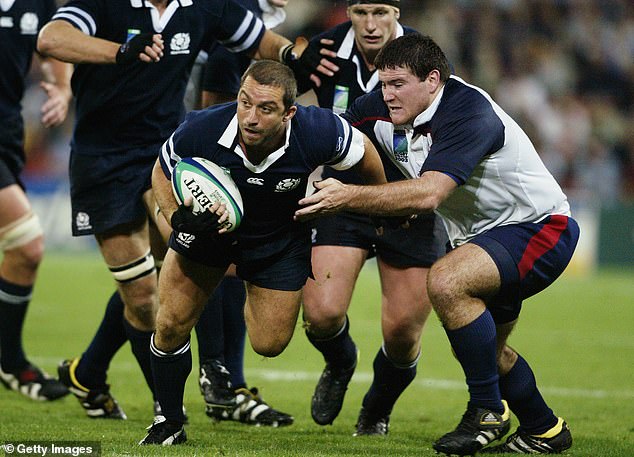 He is the son of former Scotland international Bryan (centre), pictured at the 2003 World Cup

‘You know, getting the old programme where the top half would be white and the bottom half would be blue. It was an iconic part of my rugby upbringing.

‘Then hosting my first ever rugby party as an 18-year-old, my parents were away and I got all the boys around to watch it.

‘I got this tiny television on an extension in the garden. We pretended to cook a barbecue and ate under-cooked sausages, drank Newcastle Brown Ale. And then we watched Scotland win — it was 1990.

‘Playing schools rugby against Scotland up in Carlisle, going all the way through to playing against them in the Six Nations, it’s been a big part of my life.’

Dawson understands why so many Scotland fans found him such an easy target and admits to bringing some of it on himself.

It can’t have been easy, though, for a 20-something just doing his job. Being on the receiving end of an entire rugby nation’s dislike and distaste — ‘near-on hatred’ is how he describes it — must have been unsettling.

‘Yeah, I was a feisty, chippy scrum-half,’ he said. ‘And that sort of motivated me as a player. 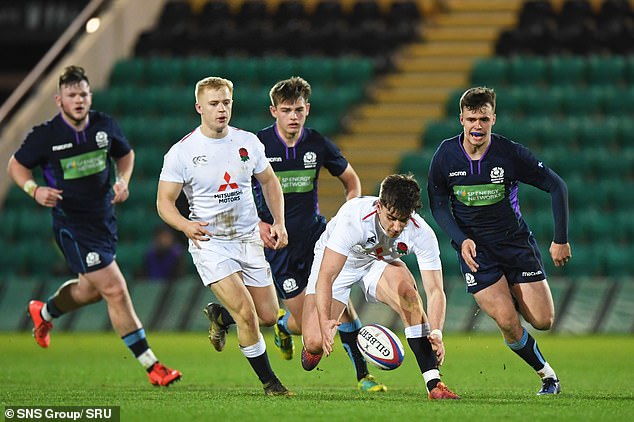 ‘It didn’t always work but I got a lot of attention from the opposition — and the fans as well.

‘I didn’t necessarily help myself, looking back on it. There are certain episodes in my career that I would change. But that makes you the person you are, as you grow older, the mistakes.

‘Being the captain in 2000, losing that game and not going up to get the Championship trophy at Murrayfield — for very innocent reasons but, of course, it looked horrific at the time (Six Nations officials offered England the chance to collect the trophy at the game or at the reception later).

‘That didn’t necessarily endear me to the Scottish fans and I totally understand that. But it wasn’t like I was doing anything on purpose. It was just one of those unfortunate miscommunications. It’s sport. You suck it up and move on pretty quickly. Scotland are not alone in the Six Nations, in that regard. Wales were the same with me.

‘When you’re playing and in the middle of your career, it is quite intimidating. It’s very much on your mind, how you need to deal with it. Because it can be taken as personal and negative.

‘Deep down, there’s a huge amount of respect within rugby and in the Six Nations community.

‘When you finish playing and go as a pundit, when you walk into Murrayfield, everyone is so embracing and respectful because of what you used to do. But, at the time you’re doing it, there is this near-on hatred towards you because you’re up against the team at the time.’ 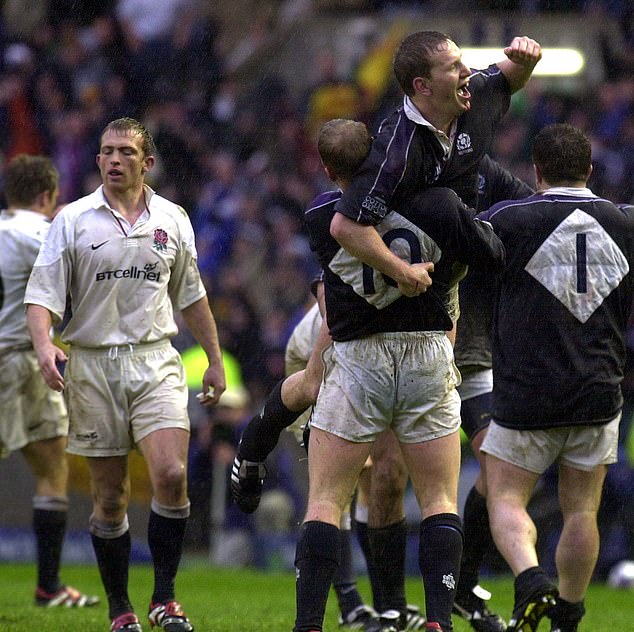 Dawson, who hosts his own Six Nations rugby show as part of his BBC Radio Five Live punditry duties, rarely let himself be too perturbed by the catcalls and criticism that came his way during a stellar playing career.

Winner of 77 England caps and three-times a British and Irish Lions tourist, few could match the scrum-half for intensity or quality on his day.

Yet even he flinches at the thought of what players, coaches, officials and volunteers might have to endure in this first full Championship under Covid restrictions.

‘Touring is nothing compared to what these players are going through,’ said the 48-year-old. ‘Even having some of the meetings in outside venues, open marquees — taking every opportunity to socially distance, beyond where you or I would have to.

‘Mentally, that’s quite draining. Because there’s not a lot of down time at the best of times. Now that’s slightly cut short and restricted because of the distancing rules, the bubble regulations they adhere to so they can play the games.

‘It’s a heck of a sacrifice that players, management and staff, and volunteers are making. We shouldn’t overlook that. They’re doing it so we can not even go to the game, just watch it in the comfort and safety of our own home.

‘I’ve got nothing but admiration for everyone associated with the Six Nations — and what they’re doing for our entertainment. 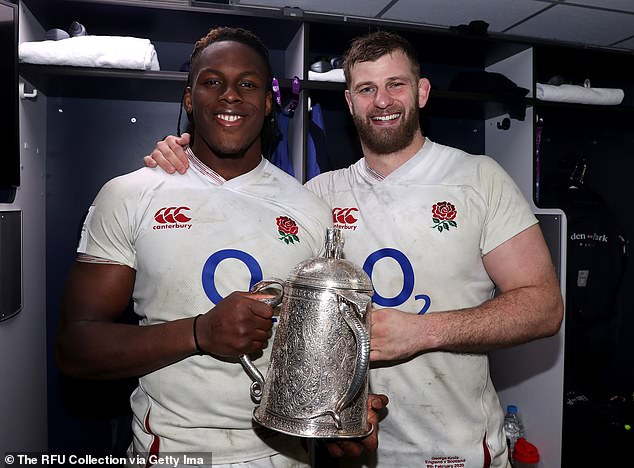 ‘From an England perspective, some players have chosen not to go in that bubble and I completely understand it. There have been players who have had to leave the bubble because of risks associated with it. Those are the times we’re living in. We have to be accommodating of people’s needs.’

There will be other aspects of the pandemic that influence this Championship, of course. One of which might play into Scotland’s hands at Twickenham on Saturday.

‘I usually take England for the title when we’re playing all the blues at home,’ said Dawson. ‘But home advantage doesn’t count for anything this year.

‘The Scots are in a better place than they were four years ago, when everyone thought they had a great chance — but ended up losing 60 points.

‘That was a really good Scotland side who rattled England’s cage. But England just came out flying.

‘Scotland are improving year on year. They’re getting experience and bulk and strength. The size, durability and fitness of Scotland will define this game.

‘If there is any kind of parity against England’s pack for a majority of the game, Scotland have a real opportunity to make the most of what is neutral territory, players not playing for a long time, everyone a bit rusty. 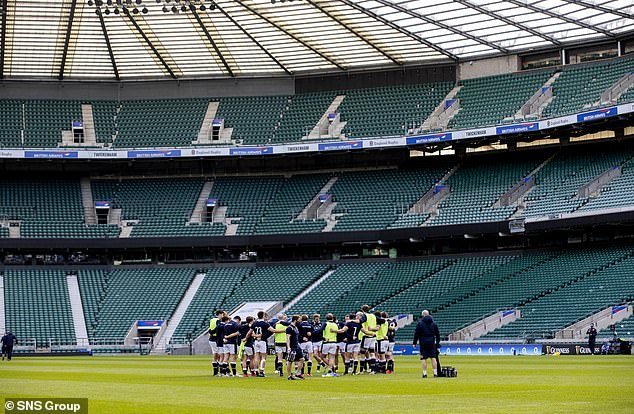 ‘What you can’t hide away from is that England are a very powerful, bulldozing-type team, who have a pragmatism. If you’re not prepared to match or accept that, you are going to struggle.

‘Teams have done it for 20, 25 minutes. But then England have ground sides down, as they did in the Autumn Nations Cup.

‘What Scotland will be looking at the second-string French side who took it to England. But taking it to England is not about flinging the ball left, right and centre. It’s having the power and pragmatism to beat England at their own game.’

You might not think that sounds particularly thrilling for the casual armchair viewer.

Yet Dawson insisted: ‘I think we will be entertained. France played such good stuff in the autumn and they’re going to be a handful because of the way they play.

‘Scotland have that type of player, that type of squad. The question will be whether they have it up front to take it to teams in the set-piece for 80 minutes.

‘With the strike runners, the general in Finn Russell who seems to have settled back in nicely, all the way back to Stuart Hogg, there is talent throughout.

‘All the teams will be looking to play a hard, physical game — but getting to know when to attack.’

Six Nations Wales v Ireland is on BBC One and BBC iPlayer from 2pm on Sunday, February 7.