Collingwood will be without Jordan De Goey for the Anzac Day clash with Essendon and he will not be seen until at least round seven after he was forced from the field with concussion in the Pies’ 27-point loss to West Coast Eagles, coach Nathan Buckley has confirmed.

In addition, key defender Jeremy Howe, who limped off with a hamstring injury sustained in a marking contest, will have scans to determine the extent of his injury and how long he might be out of action. 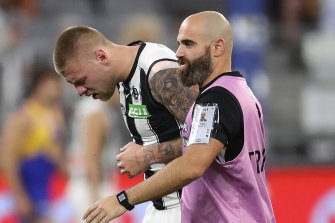 Jordan De Goey of the Magpies leaves the field under the blood rule on Friday night.Credit:Getty Images

On De Goey, Buckley said: “I’m not sure if it was delayed concussion. The doctor assessed him when he had the opportunity to and deemed that he was no good to continue.

“More than likely he misses another week. I don’t think he’ll miss any more than that with his nose. He won’t be able to play next week given the rules and then looking at round seven.”

Buckley rang the changes as the Pies looked to turn around their poor start to the season and opted to shift premier defender Darcy Moore from the backline into a forward position.

Moore kicked three goals, but the coach conceded that it was too soon to make any decisions on the effectiveness or otherwise of the move.

“He went back as an extra for last five minutes of the second quarter … I think for the large part that was effective, but no, we didn’t defend D (defensive) 50 as well, so robbing Peter to pay Paul in some ways.

“It’s not a one-week thing. We need to get a little bit more evidence to see if that’s something sustainable going forward.

“We need more than one week. He looked dangerous at times. It’s going to take him time to get a handle on it.

″⁣Last time he played forward the game was pretty different. It’s going to take time, but we, as I said yesterday, needed to change things up.

“We were looking for better and the flip side of that is Mark Keane, young fellow who came in and had a tough night tonight, but we believe he’s got the capacity to stand up in that role.”

The coach had been under pressure following Collingwood’s 1-3 start to the campaign, and that is unlikely to change following this loss.

However, he took some positives from the performance, particularly in the first quarter when the Pies got off to a strong start and took an interval lead.

“Some good, and some room for improvement. Ultimately a loss, but the effort was better from the last couple of weeks.

“The first quarter was excellent. Second quarter we really dropped away and that’s where the game was lost in many ways.

“We just weren’t able to get on our terms often enough, probably weren’t as clean around the ball as we were early and that hurt us in that second quarter.

“We were really focused on tonight and finding a better performance and in many ways, in some ways we did, in others, clearly we weren’t good enough tonight, but we’ve got a longer preparation with Essendon and we’ll focus on that.”

Eagles coach Adam Simpson was complimentary about the defeated opponents.

“I thought Collingwood were pretty sharp. They dug in … but we got our way back in the game through the contest in the second quarter.

“And our good was brilliant and our bad was a bit scratchie. So probably lost a bit of field position throughout the game. But quite effective in front ball with our talls. I thought our backs really stood up as well.

“I think our best is as good as anyone’s."

Keep up to date with the best AFL coverage in the country. Sign up to receive our newsletter twice-weekly during footy season.