Premiers Melbourne are among the clubs looking at handing an AFL career lifeline to ex-St Kilda midfielder Luke Dunstan.

The Demons, who had interest in Adam Cerra before he chose to pursue a trade to Carlton, are keen to add extra midfield depth following the retirement of Nathan Jones and the departure of Aaron vandenBerg, who is seeking opportunities at a second AFL club. 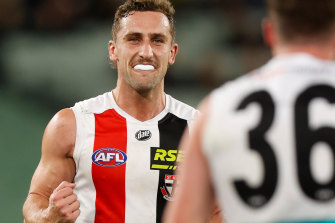 Industry sources told The Age that the Dees had spoken to Dunstan’s camp about a move to the club, where he would provide depth to a midfield brimming with talent, most notably Christian Petracca and Clayton Oliver.

Dunstan, a first-round pick in 2013, was once viewed at St Kilda as a potential future captain but fell out of favour under Brett Ratten.

But despite his flaws, most notably being an unreliable kick, Dunstan has retained a strong ability to win the ball. In 12 AFL matches this year he notched 11 Brownlow Medal votes, the second most of any Saint in 2021. This included a mid-season purple patch.

The South Australian, 26, could walk to the Dees as early as this week as an unrestricted free agent.

A move to the Dees would reunite Dunstan with his former St Kilda coach Alan Richardson.

Having been dropped ahead of round 23, Dunstan has also attracted interest from Essendon and Gold Coast, the latter of whom would only consider Dunstan as a rookie-list option given the club’s dearth of list spots.

Under now-premiership coach Simon Goodwin, the Dees have valued contested ball – a forte of Dunstan’s – above almost all else.

Vying for back-to-back flags, and with the added incentive of trying to win a grand final back at the MCG, the Dees are keen to retain experienced depth players, having recommitted to 31-year-old Mitch Brown despite the forward playing just one AFL game this year.

In a frank interview with 3AW last month after it emerged that he would not be offered a new contract by the Saints, Dunstan said that while he harboured no ill-will towards Ratten it was clear that the coach wasn’t a huge fan of Dunstan’s football.

“I wouldn’t say I didn’t get on with him,” Dunstan said.

“He’s a good fella and I think it’s pretty clear that he didn’t rate me, which is fine. It’s hard to change opinions of coaches and that’s footy, I’m not holding that against anyone.

“I think at times certain coaches get opinions of players – and once they have opinions it’s pretty hard to change them.

“It’s been pretty tough mentally over the last couple of seasons just having to work so hard to get back in the team – and to play some good footy then be dropped for the last round was pretty disappointing.”

AFL trades 2021: Stay across the moves, news and what it all means as our Real Footy newsletter goes daily for trade period. Sign up to get it here.