If there were any lingering doubts over this Melbourne team – anyone still waiting for the wheels to fall off, even after their dismantling of a powerful Western Bulldogs team last week – those doubts must be laid to rest, after they came from behind to overhaul a rampaging Brisbane Lions in a game moved to the Giants’ stadium in Sydney.

Led by the magnificent Max Gawn and Christian Petracca, the Demons gave up a 20-point lead to the Lions in the first half, then reeled them in with a ruthlessness that their long-suffering fans have longed to see. Players who had been shaded early – Steven May, Clayton Oliver, Kysaiah Pickett and Tom McDonald – all dug deep within themselves. 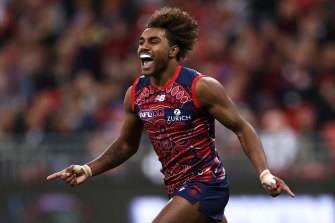 Pickett and McDonald kicked three each, both brilliant when it mattered most. Oliver had eight touches to half-time but was like a steamroller thereafter, gathering eight clearances and surging Melbourne forward. Don’t dismiss the Lions – they were fierce – but the Demons are now deserving outright premiership favourites.

The early exchanges were frantic, and played mostly between the arcs as both teams forced each other wide. The Lions asserted themselves physically from the opening bounce, and while the Demons drew first blood with goals to Bailey Fritsch and a dominant Gawn, the longer the quarter went, the more the Lions’ pressure on the ball carrier began to tell.

The most telling difference was in the air, and in the Lions’ spread of options. As good as May and Jake Lever have been for Melbourne this year, the Lions tore the Demons defence apart: Eric Hipwood and Joe Daniher took nine marks between them in the first half, and Lincoln McCarthy another three. Down back, Harris Andrews took six more.

And when the Lions weren’t marking flies, they were creating opportunities for others. Not for the first time this year, flanker Zac Bailey was the sleeper agent, kicking three clever goals, the last of them opening an imposing break between the teams at half-time. Five other Lions had joined him on the scoreboard.

In the midfield, Gawn and Petracca were massive for the Demons. But the Lions were batting deeper. Brownlow medallist Lachie Neale, after a lengthy layoff, looked refreshed and Jarryd Lyons, Dayne Zorko and Hugh McCluggage were right there with him. Oliver and Christian Salem – two of Melbourne’s prime movers – were struggling.

But Melbourne – this, new Melbourne team – have been too good for too long this season to fold when the cards are stacked against them. Oliver barged through on the back of Gawn’s relentless workrate in the ruck. With them, the Demons seized control of the corridor, and began slicing through it like a hot knife.

Now it was the Melbourne forwards’ turn. McDonald and Pickett kicked two each for the third quarter; both hit the post once each, too. And Petracca just got better and better, kicking a ripper on the run, fending off opponents with contempt, raising his game above the already frantic tempo.

The Lions didn’t flinch, with goals to captain Dayne Zorko (reported during the quarter for a high fend-off on McDonald) and a fourth to Bailey, both well against the run of play, keeping their nose in front until Pickett’s second levelled the scores as three-quarter-time beckoned.

It was breathtaking stuff, worthy of the high anticipation ahead of this match. And with the first bounce of the last quarter, it was Gawn yet again – taking the clearance himself and putting the ball in front of Pickett, who drove through his third with a set shot from a tight angle, ice in his veins. That’s the new Melbourne. These Demons are the real devils.