Melbourne have won their first premiership in 57 years, breaking the longest drought in the game, with a 74-point win over the Western Bulldogs in Perth on Saturday night.

The victory capped a stunning year, for the Demons were in the top four all season, boasted the league’s best defence, and had Simon Goodwin named the coach of the year. 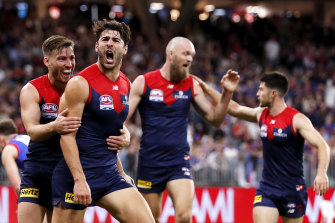 A Christian Petracca-inspired Melbourne stormed to victory over the Dogs.Credit:AFL Photos

The Demons jumped out to a 21-point lead at quarter-time but the Bulldogs, rallying behind skipper Marcus Bontempelli, booted six goals to one in the second term to take an eight-point lead into the main break. That advantage was extended to 19 points soon after the break when Bontempelli snapped his third, but the Demons responded with a stunning surge of seven straight goals to take a four-goal lead into the final break.

The Demons, led by Max Gawn, Clayton Oliver and Christian Petracca, maintained this momentum in the final term, and were full of joy as they celebrated at Optus Stadium, the first time the AFL grand final had been held in the west.

The defeat was heartbreak for the Bulldogs, who had made their way to the grand final the hard way, having to win three cut-throat finals after finishing outside the top four.