Home » Rugby » Do the All Blacks get an advantage from the Haka? Science says yes

They’re one of the most successful international teams of all time and the All Blacks’ signature challenge – the haka – has been a fearsome part of their armoury for almost 120 years.

The famous Maori war dance has helped New Zealand’s national team establish one of the greatest victory percentages in global sport. Of 619 Tests, the All Blacks have won 76 per cent of their matches.

This year has been a different story, with only three wins from seven Tests, and historic losses at home to Ireland (twice) and Argentina. It has seen the team plummet to an all-time low of No.5 in the world rankings and criticised heavily in New Zealand.

But after a big win last start, and up against the old enemy Australia in Melbourne on Thursday night, the All Blacks will no doubt belt out the haka with extra emotion.

But what exactly is the haka, and how much of an advantage might the captivating ritual give the All Blacks?

What is the Haka?

Adopted by the All Blacks in 1905, the haka is a Maori traditional war dance that, on the sporting field, is used to challenge opponents. In 1898, The New Zealand Native rugby team first performed the haka while they toured Britain and Australia. 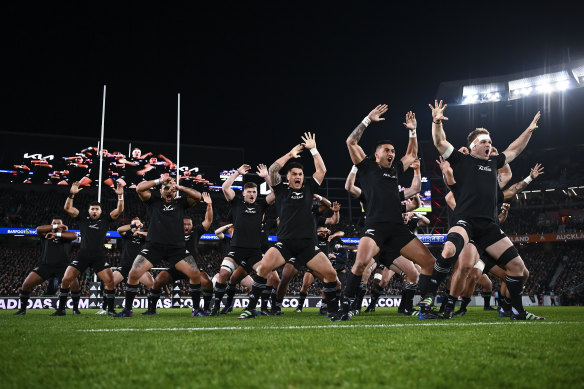 New Zealand players perform a haka before the first Test against Ireland in July.Credit:Getty

Usually performed in a group, the haka is a show of physical prowess but also an embodiment of cultural pride, strength and unity. It is a customary way to welcome, celebrate, entertain and challenge visiting tribes but has also served to invigorate warriors as they headed into battle.

The version used by the All Blacks is Ka Mate which was composed in the 1820s by Maori chief of the Ngati Toa tribe: Te Rauparaha, following a lucky escape from enemies.

That variation, since been performed by the All Blacks, was written as a celebration of life. 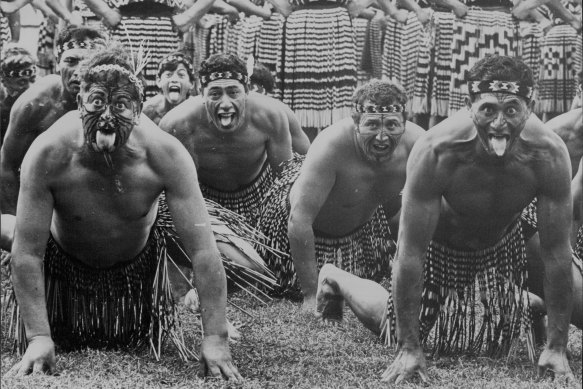 Members of a Maori welcoming party greet the visiting Queen Elizabeth II in Gisborne in 1970.

The haka can also be used as a sign of respect and to welcome honoured guests, and is also used at important occasions such as family events, birthdays, weddings, graduations and funerals.

The original lyrics and interpretation of the Ka Mate haka are as follows:

For about 80 years, the All Blacks only performed the haka when playing overseas. Since 1986, they have also included it at home matches. 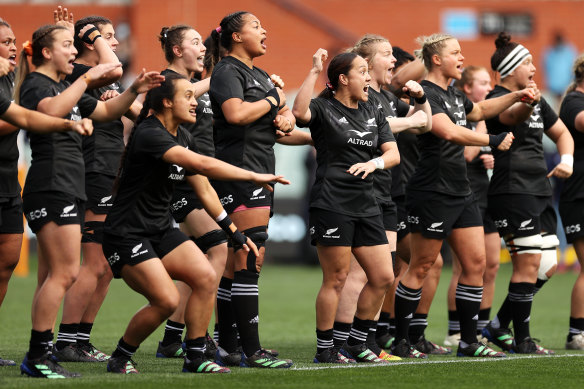 In 2005, the All Blacks also began using Kapa O Pango, which was written for the team’s use only.

The All Blacks have fronted teams across the world with their haka, but not all have taken to the ritual passively.

Before the 2007 Rugby World Cup quarter-final in Cardiff and the 2011 final in Auckland, the French team, Les Bleus, advanced in silence, arms around each other’s shoulders. They stared down the All Blacks as they executed the haka.

Some responses have been more active, involving a performance from the opposition.

In 1905, Wales sung their anthem Hen Wlad Fy Nhadau straight after the haka, the first recorded instance of a national anthem being sung ahead of an international sporting fixture. Almost a century later, at Suncorp Stadium in Brisbane, the Tongan team met the haka with their own battle dance: the Sipi Tau. The Fijian team has also faced up to the haka with their own challenge, called the Cibi.

More controversial responses have been met with fines and criticism.

France were fined in the 2011 Rugby World Cup final after joining hands and advancing over the halfway line towards the opposition, which is prohibited.

England were also fined in the 2019 World Cup semi-final in Japan, for crossing the line while lined up in a reverse V-shape. Captain Owen Farrell stood at the apex smiling while the haka was performed.

A controversial response that carried no financial penalty was when Australian player Sam Scott-Young winked and blew kisses at the Kiwis as they performed the haka before a 1992 Bledisloe Cup Test. He came from the field bloodied, however.

Recently, controversies have involved the audience, including Ireland’s fans coming under fire in 2019 for singing over the top of the haka at the quarter-finals of the Rugby World Cup. That year, Springbok fans divided spectators for the same reason.

Is there an advantage gained from performing the haka?

Irish rugby commentator Ewan MacKenna wrote three years ago that the haka shouldn’t be allowed because of the advantage he claimed it gave the All Blacks.

“[The haka] provides a psychological edge through self-inspiration and via an attempt at opponent intimidation,” he wrote. “It also provides a small physical edge as others are forced to stand still and go briefly cold.”

At the University of Queensland’s School of Human Movement, Vince Kelly put heart rate monitors on players as they executed the haka to observe physiological changes.

“I was really surprised how high the heart rates reached in players performing the haka with some reaching over 90 per cent of their maximum heart rate,” he said.

“Players who perform the haka would have an advantage over their opposition as their heart rate is elevated in preparation for the match.”

“This was a much higher heart rate response than seen in the players who watched the haka.

“Players who perform the haka would have an advantage over their opposition as their heart rate is elevated in preparation for the match.

Kelly said performing the haka increased heart rates to roughly the same level as completing a warm-up, but that it could give the All Blacks an edge if their opposing team stood still.

“Generally, teams do their warm-up and then probably come down a bit,” he said. “There’s a possibility that the team that’s doing the haka keeps those advantages of the warm-up.

“If you’ve got increased body temperature, that usually increases muscle temperature, which means the muscles are ready to exercise quicker.”

But Kelly doesn’t think teams should try to offset that effect by doing their own thing while the haka is performed.

“Potentially disrespecting the haka by not watching it or warming up while it is performed would just upset the players who did the haka more,” he said. “And then [the All Blacks] would probably be more pumped up to do well.”

Australia have experience in that. Wallabies legend David Campese practised kicking on his own during a haka in the 1991 World Cup and he scored a try in Australia’s 16-6 win triumph against the All Blacks that day.

But when the entire team tried the tactic before a Wellington Test in 1996, and did warm-up drills in their own quarter, the fired-up All Blacks put the Wallabies to the sword in a 43-6 thumping. 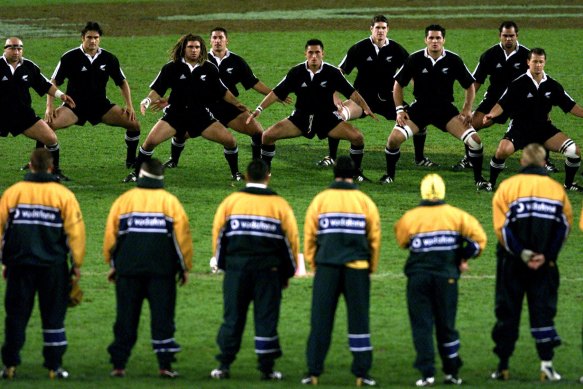 The Wallabies, still in their tracksuits, stare down a Maori All Blacks haka in 2001.Credit:Craig Golding

The Wallabies captain at the time, John Eales, later said he regretted the decision to ignore the haka, believing the power of the performance came less from the effect on the opposition, and more from connecting the All Blacks with each other.

Around the early 2000s, the Wallabies began keeping their tracksuits on during the haka, taking them off afterwards to extend the amount of time between the All Blacks’ war dance and the start of the match – a tactic which Kelly said had some merit.

“[The Wallabies’s tracksuit strategy] means the team doing the haka would lose the benefit of that warm-up effect because their core temperature and heart rate would be reduced,” he said.

But the Australian team have since abandoned that tactic.

As New Zealand prepare for their crunch game against the Wallabies on Thursday, and with their unhappy fans watching on, don’t be surprised if they draw plenty from the haka in Melbourne – physically, emotionally and pyschologically.

Watch every match of The Rugby Championship and Bledisloe Cup on the Home of Rugby, Stan Sport. Returns for the Wallabies v All Blacks in the Bledisloe Cup this Thursday from 7pm AEST. All matches streaming ad-free, live and on demand on Stan Sport.