Collingwood defender Lynden Dunn was expecting knee surgeon Dr Julian Feller to give him the tick to return to the game next week.

After back-to-back knee reconstructions – interrupted by just a half of football in his first comeback match in March last year – the 32-year-old had primed himself to play AFL in a packed MCG on Anzac Day. 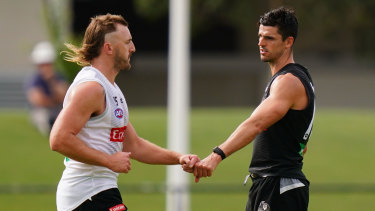 When Dunn told Nathan Buckley in early January that was his objective the coach raised his eyebrows.

"He looked at me like I was crazy and there was no chance that would be even happening considering I wasn't on the list," Dunn said.

In the end the aim won't be realised but not for the reasons anyone could have predicted when Dunn made it his goal.

At that point Buckley was entitled to preach caution as there were many obstacles in the likeable veteran's path before coronavirus entered the picture.

"I have always backed myself. I have got no doubt when I am fit and firing I am in our best 22," Dunn said.

"I am pretty self driven and know what I want to do and know how I want to get there and sometimes it doesn't work but more often than not, for myself, it brings positive outcomes."

By March, Dunn was back in full training and on March 7, staff and teammates were told that Dunn had earned his rookie spot as they gathered for a trivia night immediately after the Marsh Community Series match against St Kilda in Morwell. 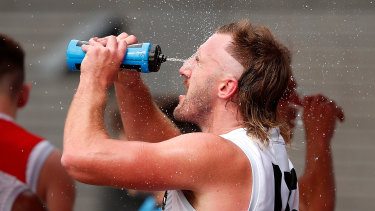 His overwhelming sense of relief was replaced by gratitude when his teammates and football department colleagues carried on after Buckley delivered the good news as though they were winning owners in Flemington's mounting yard during the spring carnival.

Dunn said the reaction was humbling, but his impact at Collingwood is stronger than the 31 games in the black and white might suggest.

"It was a small hurdle to get back to where I want to get to, but it is kind of a big deal because if you don't tick that first box then it's pretty hard to tick the other boxes I have on my checklist," Dunn said.

He will keep his appointment with the surgeon this week so he has one less thing to think about when the season resumes, conceding he feels stronger than he did last time around adding invaluable time with Tim McGrath, a physiotherapist in Canberra, to his program.

"This setback holds me in good stead to play round two," Dunn jokes.

He is viewing the mental break – as unwanted has it has been – as a potential positive too.

"I have been working so hard for so long trying to get my body right and get my spot back on the list that [shutdown] probably almost came at a good time to have that little mental release and not think about what could have been but think about what is to come," Dunn said.

He has been kicking the football at an oval across the road and doing weights in the gym. He has also been primary carer for his two sons Emmett and Easton while his wife Sam works at home during the coronavirus restrictions, the footballer saying "Daddy's day care is open".

With a rookie's wage set at $80,000 a year Dunn won't be playing for huge dollars if and when the season resumes after the players accepted a 30 per cent reduction in wages if they play 17 games.

Dunn isn't complaining however, understanding that many more people are worse off than him but it does point to the fact not all players are on megabucks.

But that was never what was driving Dunn – who has played 196 matches without playing in a final – when he decided to have a crack at winning a spot without any guarantees he would.

"I was all in, that's for sure. All I wanted to do was play footy and I have still got that chance. I did not want to finish my career having done two knees and wondering what could have been. I am as hungry as ever and still feel like I have got some good footy left in me," Dunn said.

"We have put ourselves in [contention] the last couple of years coming so close … we are still in a great position this year and hopefully next year so that is the big driver."

Dunn is taking this setback in his stride, again confined to the sidelines but after what he has been through in the past two seasons he is prepared to be patient.

"It's the hardest thing I have ever had to go through, injury free then doing back-to-back knees," Dunn said.