Richmond's Shane Edwards had what he described as the "surreal" experience of training with Gary Ablett in the AFL's Queensland transition hub, as the pair prepare to rejoin their respective premiership contenders for finals.

Edwards said training with Ablett – who joined him and St Kilda's Dan Hannebery for a session on Friday within the confined spaces at the transition hub – represented an "unbelievable opportunity" that had rendered him a spectator.

"It's pretty surreal," Edwards said of his morning training with Ablett on the Gold Coast. 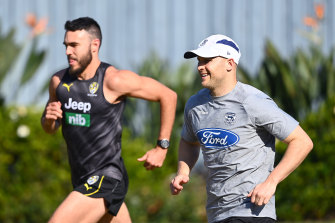 Shane Edwards and Gary Ablett training on the Gold Coast on Friday.Credit:Getty Images

"It's actually something that I'll probably reflect back at the end of my career and think what an unbelievable opportunity. You know so much about him, but I haven't really met him properly. He's just an amazing bloke and I'm going to try and learn as much as I can off him.

Edwards, asked to compare his very brief training experience with Ablett to doing the same with Richmond champion Dustin Martin, said: "From what I've seen, from our one session together, they're pretty clean and they've got pretty good skills, they're just really sharp and powerful, it's everything you see on the oval.

"I was more of a spectator out there, to be honest."

Edwards, who had stayed in Melbourne for the birth of his now three-week old daughter, expected to be back with the Tigers in round 18 "barring any mishaps".

Ablett, Edwards and Hannebery trained in a very small grass area of about 80 metres in length and less than 50 metres in width – a confinement that restricted the nature of their training. They were guided by ex-Cat and recruiting official at Geelong, Andrew Mackie, and former Bomber and Tiger Sam Lonergan.

"I suppose we've had a large training block already back home in Melbourne and the other guys have as well," said Edwards.

"We've finished our month of really hard training so we're due for a few lighter sessions … our training here doesn't really have to be huge, you know, with long runs and long kicks and stuff. So we'll use it as a tune-up and also stay sharp with contested stuff.

I was more of a spectator out there, to be honest.

Edwards, speaking prior to the news breaking of his teammates’ early-morning escapades outside a strip club, said of the Tigers' progress: "We're going alright at the moment … there's still things we need to improve on, obviously making the most of our dominance going inside 50. But yeah, we're still learning and fine tuning our game plan."

Edwards said he had always planned to return to the team.

"I was going to come back. The plans obviously changed when they decided the season was going to stay up here. Plus when the due date of the baby came," he said.

His daughter had "been awake all night, every night" since her birth.

Edwards and Ablett would be spectators, too, when the Cats and Tigers meet next week, and the Richmond veteran wasn't keen to have a dig at Ablett about that game.

"I don't want to start something he can finish," he said.

Related posts:
Basketball News:
Jey Uso on facing Roman Reigns at Clash of Champions, why he prefers tag team wrestling and a rebirth of the Samoan SWAT Team
5 talking points as Man Utd prevail after added-time drama at Brighton
Where Houssem Aouar would fit in at Arsenal and who will have to miss out
MLB News:
Yankees’ Aaron Boone unloads more F-bombs after an ejection
NCAA issues COVID-19 guidelines for college basketball season
Michael F. Florio's Week 3 fantasy football matchups
Recent Posts
This website uses cookies to improve your user experience and to provide you with advertisements that are relevant to your interests. By continuing to browse the site you are agreeing to our use of cookies.Ok